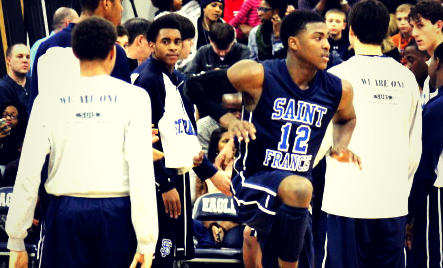 There’s always a lot of discussion about which prep team is the best overall team regardless of classification in the field of fourteen when the state basketball tournament finals begin each year at the Macon Centreplex. Saturday’s Class A Private division title tilt at 12:45 PM between St. Francis Academy of Alpharetta and Greenforest Academy of Decatur have both received a lot of attention when best teams in the tourney are voted on.

It’s difficult not to vote for either or for both teams when one takes a look at their body of work. St. Francis is playing in its third straight state Class A Private title game and they are defending the one they captured last year, while Greenforest is trying to win its second championship trophy in three years after edging St. Francis in Macon in the 2013 Class A Private School title game.

Defending champion St. Francis comes into the game with a record of 28-3 with only one of those losses inside the state of Georgia, and early season loss to Class AAAAA power Miller Grove. The other two losses were to nationally-ranked teams in holiday tournaments outside of the state. The Knights have three D-1 commits in their starting lineup in Malik Beasley, Kaiser Gates and Josh Coleman to go along with the top five nationally-ranked point guard, Kobi Jordan-Simmons, who is being heavily recruited as a junior.

Greenforest Academy’s lone loss was to Class AAAAAA power Pebblebrook, 75-72 in overtime early in the season and the Eagles then bounced back from that narrow loss to finish the year with a sparkling 27-1 mark. By the way, Pebblebrook will play in the Class AAAAAA title tilt against Wheeler on Saturday night in the final game of the GHSA state tournament.

Though this game is for the state’s smallest classification Class A title, it promises to be one of the best games of the three-day championship experience in the mid-state. Saturday’s tipoff time is 12:45 PM on GPB-TV.

END_OF_DOCUMENT_TOKEN_TO_BE_REPLACED

On this episode of the Football Fridays in Georgia podcast, Hannah and Jon break down National Signing Day with the help of Rusty Mansell from 24/7 Sports and GPB's voice of Football Fridays, Matt Stewart.