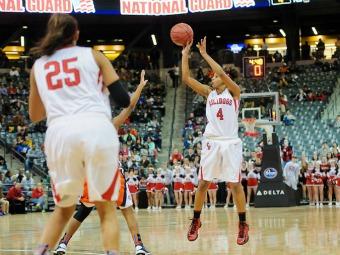 Coach Bryan Sellers’ team rode the prolific scoring of seniors Peyton Whitted and Lexie Brown with the rebounding of junior Stephanie Amichia and shooting of junior guard Baylee Rexing to a school-best 30-1 record this season.

The Bulldogs can match up with Norcross, one of the few teams in the state that could dream of making such a statement. While the Blue Devils possess all-everything senior Diamond DeShields and talented teammate Shayla Cooper, the Bulldogs boast Whitted, a Penn State signee, Brown, a Maryland signee, and Rexing, an Ole Miss commitment. North Gwinnett’s only loss, however, came to the Blue Devils on Jan. 23. Brown averages 18.5 points per game and scored nine against North Cobb in the semifinals. The Warriors’ tough matchup zone gave the Bulldogs trouble for quarter before a 19-7 run in the second quarter yielded a 31-23 halftime edge. Whitted totaled 13 for North Gwinnett in the semifinal while Amichia had 14. Sophomore Alyssa Munlyn, daughter of former Georgia Tech stat James, added 12 off the bench. Perhaps bigger than any scoring stats from the North Cobb game, however, was Amichia’s game-high 17rebounds. It was her 13th double-double of the season.

The inside-outside combination of the Bulldogs has been impossible for anyone – except Norcross that is – to solve this season. North Gwinnett can rebound and pound opponents into submission down low, or they can shoot the lights out from the perimeter. Making three-pointers could be the difference against the Blue Devils. In the two wins over Norcross the Bulldogs nailed 15 total threes, while in the lone loss, North Gwinnett made just one. Rebounding is another area to watch in this matchup. In the loss to Norcross, North Gwinnett grabbed just 21 rebounds. In the two wins, the Bulldogs totaled 65.

The Blue Devils are in their fourth final four in four years and are gunning for the program’s third state championship in that same time span. Behind the recent emergence of the Norcross girls program becoming one of the state’s dynasties is sensational senior shooting guard Diamond DeShields. The daughter of former Major League Baseball player Delino, the 6-2 dynamo has captured about every honor a high school player can achieve. In addition to the team hardware Norcross has won in her four years, DeShields was recently named the Naismith Girls High School Player of the Year. The award is one of the top honors for a high school basketball player and has been handed to the nation’s top player since 1987. A North Carolina signee, DeShields led Norcross in the semifinal blowout of Langston Hughes with 21 points, while fellow senior and Georgetown-signee Shayla Cooper added 15. The Blue Devils dominated Hughes throughout the semifinal. Norcross sped to a 28-7 lead at the end of one quarter behind 15 from DeShields. At halftime, the score ballooned to 42-7 after the Devils shut out their opponents in the second period. The gigantic lead peaked at 56-7 midway through the third quarter.

The semifinal explosion came as a reminder that the Blue Devils were upset in last year’s final four by eventual-state champion McEachern. Norcross did not mess around with Hughes as a result. However, in the final stands North Gwinnett, the only in-state team to have defeated Norcross this season. After dropping the initial contest of the year to the Bulldogs, coach Angie Hembree’s squad dominated North Gwinnett 46-29 on Jan. 23. But North Gwinnett won the the third game between the two in the region tournament on Feb. 16.

While Hillgrove is in its first-ever finals, Norcross is a veteran in this stage of the tournament. The Blue Devils have now made six of the last nine finals and won four of them. Their last time here was in 2011, when an underrated band of Devils upset goliath Milton to achieve one of the great upsets in state finals history.

This year’s squad rolls into Macon having won its last 16 games, its last loss coming on Jan. 11 to Mill Creek. Two of the Devils’ losses came to finalists in other classes, Miller Grove (AAAAA) and Columbia (AAAA). Norcross, however, defeated Class A-Private finalist Greenforest Christian while also knocking off Dematha (Md.), one of the top programs in the nation, during the Hilton Invitational.

As always, coach Jesse McMillan’s squad is talented, if a tad young. The Bue Devils boast just two seniors in Brandon Goodwin and Terrance O’Donohue. Goodwin, a 6-0 point guard, is the star of the show leading the team in scoring on several occasions. In the semifinals win over a solid North Cobb squad, Goodwin led all scorers with 26, including 10 in the fourth quarter. Goodwin has received a bevy of offers from mid-major programs, including Southern Miss, Georgia State, MTSU and Northeastern. Juniors Andre Chatfield and Khalen Pinkett are also scoring threats at guard. O’Donohue rules the paint, but can also hit the mid-range jumper. The College of Charleston signee stands 6-7, above average for a high school power forward. Junior forward Lorenzo Carter combines with O’Donohue to pack a nice 1-2 punch in the interior. A star defensive end in football with offers from dozens of the nation’s top programs, Carter grabbed a game-high 11 rebounds in the semifinals win while also scoring eight points.

The Hawks are making their first appearance in the state finals in boys program history after a stirring 56-54 defeat of traditional-power Wheeler. Once an afterthought in Cobb County basketball, Hillgrove stepped to the forefront with its win over the acclaimed Wildcats and will now try to take down another perennial power in Norcross.

Leading the charge for coach Ed Morris’ Hawks is junior forward Kyle Castlin, who dropped 20 points in the semifinals along with grabbing eight rebounds and four steals. Senior guard Jordan Sexton didn’t start, but added 17 points to the Hawks’ cause while junior forward Keith Ray had eight points, including a crucial free throw late that pushed the Hillgrove lead to three. Castlin has led the team in each playoff game in the scoring department.

Hillgrove took charge in the semifinals win during the late third quarter, when the Hawks embarked on a 15-2 run that gave them a 47-39 in the fourth. Castlin had eight points during that stretch. In the quarterfinals, Castlin led the team with 18 while fellow junior B.J. Brown, a power forward, had 15 including nine in the fourth quarter. Ray tallied 10 against the Pirates. Castlin dropped 19 on Tri-Cities in the second round while Ray added 18 and Brown had 14.

The Hawks were one of the most consistent teams in the state this season, losing just four games, three of which came to Region 4-nemesis North Cobb. In the playoffs, however, Hillgrove rolled past Valdosta, Tri-Cities and Brunswick by an average of 11 points per game prior to the Wheeler win. It has been a record-setting season for Hillgrove, which made its first final four and set a school mark for victories by surpassing the previous mark of 27.