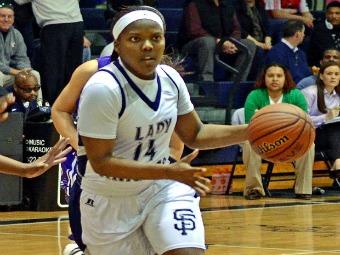 The Norcross Blue Devils thumped Langston Hughes from the opening tip en route to an easy 64-16 victory in the Class AAAAAA semifinals at Georgia Tech. Diamond DeShields had 21 points and three steals while Shayla Cooper chipped in 15 points and five rebounds to advance to the program’s third finals appearance in the last four years. … North Gwinnett raced past North Cobb 57-40 in the second semifinal matchup, setting up a fourth meeting between these two teams this season. North Gwinnett holds the edge a 2-1 with the most recent victory coming in the Region 7-AAAAAA tournament finals. Stephanie Amichia scored 13 points and snagged 17 rebounds in the victory. … Defending Class AAAA champion Miller Grove will have a shot at the AAAAA title after a 49-23 win over Effingham County. Klarissa Weaver had 15 points to push the Wolverines back to the title game while Tashi Thompson finished with 12. … Southwest DeKalb will await Miller Grove after edging past Forest Park 43-41 at Kennesaw State. Southwest DeKalb had to rally back from 12 points down in the third quarter after Kayla Potts got Forest Park an early led with her game-high 19 points. Tynice Martin led Southwest DeKalb with 12 points. The Southwest DeKalb/Miller Grove final will be a rematch from last year and the fifth time these two teams have met this season. The Panthers defeated Miller Grove for the Region 6-AAAAA title two weeks ago. … Sandy Creek moved past Mary Persons and into the Class AAAA championship thanks to 18 points from Sydney Jarmon in a 48-23 victory Saturday. Mary Persons was led by Aleah Holden’s 11 points. … Defending Class AAA champion Columbia will be seeking a third title in four years after a five-point win over Jonesboro at Fort Valley State. Columbia was paced by Yaktavia Hickson’s 18 points, including 12 in the final quarter. … Asia Durr was the story for St. Pius X as the Golden Lions slipped past Chapel Hill 68-61. Durr finished with 27 points as Kyle Snipes’ team reached the finals for the first time since 2007. … St. Pius X will face a Dawson County team looking for the first title in program history. Dawson County beat Southwest-Macon 68-50 to reach the finals for the first time since 1991. Sheyenne Seabolt led Dawson County with 27 points. … Laney won the battle of the unbeatens 67-44 over Kendrick Friday night as Baylor signee Khadijiah Cave led Laney with 31 points. Laney will seek the program’s first title. The Laney boys won the AA title last year. … Awaiting Laney is Wesleyan, which whipped Thomasville 83-34. Jan Azar’s team forced 36 turnovers to go with senior Katie Frerking’s 29 points. Wesleyan will try for a sixth straight state title, which would tie a GHSA record set by Hart County (1989-1994). … Randolph-Clay has lived up to the billing as the No. 1 seed in the Class A-Public bracket thus far. After topping 70 points in each of the first two rounds, Randolph-Clay clamped down on Wilkinson County 57-34 in the semifinals as Kaneika Washington had 21 points in order to reach the finals. … Gordon Lee will be ready to take on Randolph-Clay after a 57-49 win over Towns County at Fort Valley State Friday night. Gordon Lee received 25 points from Kassidy Blevins to pull away late for the win. … Perhaps no team was more impressive over the weekend than Southwest Atlanta Christian, which shut down Holy Innocents’ from the first quarter on in a 78-43 victory. Marquita Daniels led Southwest Atlanta Christian with 19 points including her team’s first 12 points, all on 3-point baskets. Alexis Carter contributed 16 points towards the victory. . … St. Francis fills out the other slot in the Class A-Private bracket after a very impressive 50-27 victory over Calvary Day. St. Francis was in control the entire game, ripping off an early 14-2 run to seal the win. This is St. Francis’ first trip to the state finals.