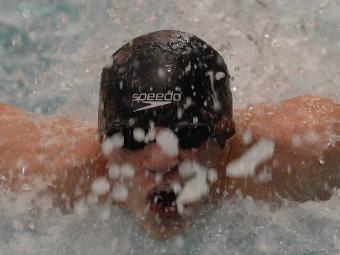 It is yet another swimming and diving title for Westminster, which are as familiar to the school as West Paces Ferry Road, the avenue that runs just by the Buckhead school. It is the second girls championship in a row for Westminster and 21st overall.

The Wildcats took the girls championship fairly easily with 306 points, well ahead of runners-up Woodward Academy and Marist, which tied with 239 points. St. Pius came in fourth and Pace Academy rounded out the top five.

“We’ve got some pretty good talent that we’re definitely going to miss” said Westminster coach Pete Higgins, who has been at the school since 1960. “I’m going to have to start coaching next year instead of just filling out the entry blank.”

“Nicole Stafford is a real swimmer. She’s the real deal,” Higgins said. “She’ll get after you. She’s a competitor.”

Dalton became the first boys swimming team from outside of metro Atlanta to win a state championship since another group of Catamounts did it in 1993, when there was only one title to be won. Coach Charles Todd’s team won two of the three relay events and got wins from senior Georgia-signee Taylor Dale in the 100 backstroke and 100 butterfly to pull away from Westminster in the boys meet. Dale led his team despite suffering from mononucleosis recently.

“As a matter of fact, yesterday, we took him to the hospital after his 400-free,” Todd revealed. “His blood-sugar was low, his iron was low, they were afraid his spleen was enlarged. But he toughed it out and I’m really proud of him.”

Todd knew his team would have to come up with something unexpected to beat its top competition, traditional powers Marist and Westminster.

“My relay for the 400 free was like 32nd (in the state) with a slow time entered because they just had’t swam any meets this year, and we moved up from 32nd to first,” Todd said. “No one in Atlanta had seen this coming. We had a left hook waiting for them. We put it on them yesterday and we just stayed on top of them today.”

Another big break for Dalton came in the 200 medley relay, as Marist’s team forfeited due to jumping before the touch. That cost the War Eagles up to a possible 40 points and helped cause Marist to finish sixth with 133 points. Dalton totaled 192 while Westminster was runner-up with 173.

For the fourteenth straight season and fifteenth time in the last sixteen years, the large classification boys swimming and diving title will call Gwinnett County home. Parkview defended its title by outpointing Chattahoochee 234-226. Lassiter finished in third place with North Gwinnett and Alpharetta rounding out the top five. Parkview netted its eighth title since 2000 and its 10th since 1995. Parkview won with depth and without many victories in individual events. In fact, the Panthers claimed just Ben Warren’s victory in the diving competition, but Geoffrey Carter earned a pair of important second place finishes and the team earned runner-up in the 200 medley relay. Lassiter’s Jimmy Yoder won a pair of individual events (200 free, 100 fly) while Zach Bunner also claimed two titles (200 IM, 100 back) for the Trojans. Each contributed to Lassiter’s wins in the 200 and 400 free relays. Mill Creek’s Chris Powell won the 50 free event, earning him the distinction of AAAAAA’s fastest swimmer. He also claimed the 100 free. Alpharetta’s Cody Reul won the 500 free to help the Raiders finish third.

In the girls AAAAAA finals, Lambert earned the program’s first state swimming and diving title by compiling 292 points, taking out Peachtree Ridge, who finished with 222 points. Lassiter finished third, with Johns Creek and Brookwood rounding out the top five. Lambert is the first program other than Lassiter and Brookwood to claim the girls large classification crown since Northview in 2007. The Longhorns got out of the gate early with a victory in the 200 IM relay then iced the victory with a win in the 200 free relay and a third-place finish in the 400 free relay. Kennesaw Mountain’s Rebecca Postoll won the 500 free and then the 200 free finals, narrowly beating out Brookwood’s Rachel Muller, a pre-race favorite. Archer’s Alexis Smith won the 50 free before finishing just behind Kaitlin Kitchens of Johns Creek in the 100 free. Kitchens narrowly finished second in the 50 free.