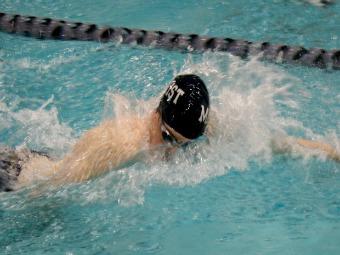 There is something special about this pool at Georgia Tech. While there are many tremendous pools around the state that host high school events, the trip to the westside of Atlanta for the state finals is always special no matter how often teams come here.

“Having the state championship at Georgia Tech is awesome,” Parkview coach Jack Gayle said. “Tech is one of the best pools in the country. The guys walking into Tech and seeing the stands and the all the people up there gets them pumped up mentally.”

After a season full of important meets, teams that made it to the weekend know how important the state finals meet is.

“That’s the meet that matters,” Marist coach Terry Blish said. “All the other meets are designed to prepare for that and to get people qualified to swim in that.”

Blish and Gayle would know about state championship meets as the two have been a big part of them. While Blish has won four boys state titles at Marist in his career, which began at the Dunwoody school in 1973, Gayle has won three boys titles at Parkview since he became head coach in 2004 and was a member of two state championship teams at the Gwinnett program in 1995 and 1998 as a swimmer.

According to the Score Atlanta/GPB swimming and diving polls, the Parkview (Class AAAAAA) and Marist (Class A-AAAAA) boys teams are each ranked at the top of their respective classes. However, that does not always mean success in the state meet.

“We’ve had many upsets in the years that I’ve been involved,” Blish said. “Some would say we’ve pulled a few of those upsets. It’s very often billed as an upset. We’ve had years when we weren’t the heavy favorites and others where some have said the only way we’d lose is if we got lost on the way to the pool.”

While Parkview is defending its 2012 boys title, the Panthers know what it is like to be the underdog chasing the team with the proverbial championship belt.

“Last year, we had been second two years ago, and I know that weighed heavily on (the team),” Gayle said. “Our theme was ‘V for vendetta,’ and they had kind of a mission. That was a big motivation, whereas this year, being the defending state champions is a lot more difficult because everyone is looking to you to perform.”