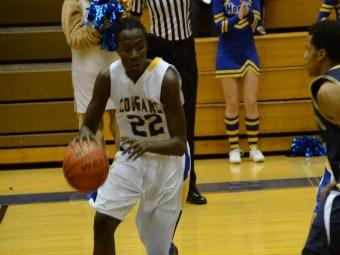 While we all know about the prestigious basketball programs at Norcross, Miller Grove and Columbia, many other schools across the state boast outstanding boys and girls teams but perhaps we’ve let one of the teams live in the shadows due to the spotlight shining brightly on just one. Tift County’s girls are on a serious winning streak, but get overlooked sometimes as the boys team is perhaps the best in the state. Tift County has won 14 straight after a 3-3 start and Brakia Bateman and Alexis Johnson are helping pace the Blue Devils. Hillgrove’s boys moved up to No. 3 in the latest boys rankings, a bit of a surprise, as most of the attention this season was focused on whether the girls team could make its way back to the state finals. The boys team was 17-12 one year ago, falling in the first round of the GHSA state playoffs. Archer is another boys team that had high expectations, but the girls also have made a statement as the Tigers sit in second place in Region 8-AAAAAA. Archer gave undefeated Parkview everything the Panthers could handle Tuesday. … Chattahoochee is simply too good to ignore anymore. Kacey Martin has the team in the Score top 10 this week as the Cougars currently boast an 11-game winning streak dating back to Dec. 29. Different players have stepped up for the Cougars, but Score 44 standout Markus Terry is the first name many think of when breaking down the Cougars. Senior Trey Archambeau and sophomore Marcus Sheffield are helping the Fulton County powerhouse become a team no one wants to face in the postseason. … North Gwinnett knocked off Peachtree Ridge Tuesday to stay within striking distance of the Region 7-AAAAAA top seed, and even more impressive is that the Bulldogs are finding success without many seniors. Sophomores Tobias Howard, Malik Carter and Kamaran Calhoun are teaming with juniors Ahmad Carver and Owen Lewis to help the Bulldogs to a 17-5 overall record and a 11-3 region mark. North Gwinnett sits just one-half game behind both Norcross and Peachtree Ridge, who play at the House of Blue this Friday. Norcross has beaten North Gwinnett twice this season while the Bulldogs and Lions have split the season series.