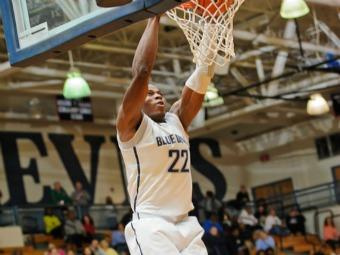 While plenty expected a Lexie Brown-Diamond DeShields showdown in last night’s North Gwinnett-Norcross girls basketball game, it was junior Baylee Rexing that torched the Lady Blue Devils for 16 points to help North Gwinnett pull away with a victory. Rexing, a candidate for the 24 2Look4, nailed four 3-pointers and gives the Bulldogs a third scoring option after Brown and Peyton Whitted. Joshlyn Belcher and Stephanie Amichia are also threats for Bryan Sellers’ team which has been ranked as high as No. 3 nationally in the MaxPreps Xcellent 25. … Jesse McMillan’s Norcross Blue Devils pulled into a tie for second place in Region 7-AAAAAA last night as his team played stout defense to knock off North Gwinnett. Watch out for the Blue Devils, who are getting healthy and starting to jell with Lorenzo Carter moving to basketball after helping the football team win the state title. … The Buford boys basketball snapped North Hall’s 11-game winning streak yesterday and may have put the blueprint out for how to beat the Trojans. Normally, a strong-shooting team, North Hall was held scoreless for long stretches during Buford’s victory. The Wolves were able to use their length to shut down scoring opportunities, and if the shots are not falling, North Hall is susceptible to the upset. Ethan Smith and Adam Kelly must be able to get shots off for North Hall to be successful. … Tift County is the No. 1 team in Class AAAAAA, but think how good the team would be if T.J. Cromer had stayed to suit up with Brannen Greene. Cromer now suits up for Westover and he scored 30 points against his former team. Greene led Tift County with 37 points, including six 3-pointers and five dunks. … And don’t forget about Tift County’s girls team, which has now won 10 straight games. At most other schools this team would be receiving all of the headlines. … The Jonesboro girls basketball program is red hot after picking up a 10th straight win last night. Kimberly Dawkins, Briana Benson and Victoria Florence are three players that make the Cardinals go. In an interesting twist, according to the Clayton News-Daily Jonesboro coach Lamar Harris brought Dawkins off the bench last night and had her run the press, which completely shut down Upson-Lee. This would be an interesting strategy should Harris employ it against stronger competition. … Once again the Gainesville basketball team has benefited from the football season coming to a close. The Red Elephants started the year slowly as most of their projected standouts were chasing a football title, but with the return of Deshaun Watson, Caleb Hayman, Tray Harrison, Rodney Lackey and Chase England, the team has gone 6-2 since Dec. 22.