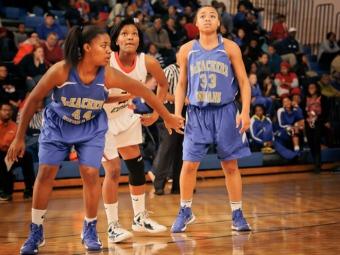 Several defending basketball champions have found this year that “heavy is the head that wears the crown.” A handful of programs that earned GHSA basketball titles last season have so far failed to hit their stride for various reasons. The Milton boys basketball team saw several players either graduate or transfer out of the program after winning the title last year. Head coach David Boyd also left the program this past September stemming from a school investigation into a claim of “undue influence.” Milton, which began the year ranked No. 6 in the Class AAAAAA poll is now unranked after starting the season with three losses. Miller Grove has maintained a No. 1 ranking after winning four straight state titles, mainly because of Sharman White’s ability to coach up players in an extremely tough region. White’s squad lost to defending Class AAA champion Columbia earlier this season, but the Wolverines appear to be hitting their stride with the calendar flipping to 2013.

Class AA boys champion Laney (10-4) is finally rounding into form after a tough early slate. Laney was ranked No. 1 to begin the year but has fallen to No. 4. Finally, Whitefield Academy (6-5) is struggling after losing two of its best player last year, Kenny Gaines to UGA and Lorenzo Carter to Norcross. Former Whitefield Academy coach Tyrone Johnson is also taking the year off.

On the girls side, Class AAAAA champion McEachern was torched by graduation. While Te’a Cooper and her sister Mia remain, the Indians have watched a No. 1 preseason ranking slip away. The Indians dropped four of their first six games against some of the state’s best competition. Miller Grove also struggled early without Tabitha Fudge, a Score 44 member one year ago. The Lady Wolverines fell to Columbia several weeks ago in a champion vs. champion showdown and lost to St. Francis and Stephenson before rattling off a recent winning streak. Klarissa Weaver and Tashi Thompson seem to have Renee Breedlove’s team back on track now. Lovett was also tagged by Wesleyan earlier this week in a matchup of defending champions. Wesleyan was able to hold Sydney Umeri to just eight points in the Wolves’ win. Decatur also slipped past Lovett over the weekend. Lovett is down to No. 5 in the latest Score rankings.