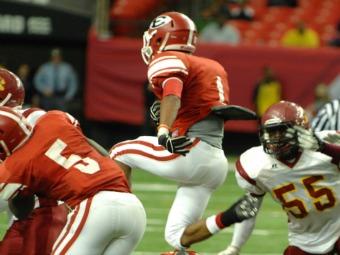 The Norcross Blue Devils had never won a state title before Saturday, and until Alvin Kamara stepped up, it looked as though Lovejoy would walk out of the Georgia Dome with the Class AAAAAA prize. Kamara showed just how talented he is by throwing for a huge completion, hauling in the go-ahead score and rushing for the game-clinching score. Some recruiting pundits will argue that Walton’s Tyren Jones is the best back in the state, but Kamara stepped up on the biggest stage and delivered a performance that will be discussed for years to come each championship weekend. Credit must go to Norcross head coach Keith Maloof for not just continuing to feed Kamara, but for also resisting the urge to overplay RB Myles Autry. The junior came up with an incredible touchdown to spark the Norcross comeback, but Maloof only used the hobbled Autry for a handful of plays. “A state championship isn’t worth ruining a player’s career over,” said Maloof after the game.

Even though it was in the Class A-Public finals, it was clear to see that ECI boasted one of the top one-two punches at running back of any champion crowned over the weekend. Greg Purcell notched three scores and 142 yards on 25 carries as ECI dominated Dooly County 47-7. James Brown threw in a dash of spectacular with play after play, including an electrifying 26-yard touchdown run and an eye-rubbing 53-yard touchdown reception. He finished with 135 rushing yards on 14 carries. It should be noted that Dooly County standout defensive tackle Montravious Adams was hobbled by a cut block that appeared to be dirty on video replay. The ECI offense was flagged on the play. Adams suffered the injury in the first half before the game got away from the Bobcats, and perhaps his presence could have prevented some of the rushing damage inflicted by the Bulldogs. Regardless, the offensive rushing attack was impressive and ECI earned the title after dispatching Wilcox County in the semifinals before beating Dooly County in the finals.

Eagle’s Landing Christian Academy lost its first game of the season 24-19 to Washington County before rattling off 13 straight wins to capture the first Class A-Private title in GHSA history. ELCA cruised through the playoffs, barely breaking a sweat despite suffering through various injuries that held the Chargers’ star running back and quarterback out of action. The George Walton Academy contest was the Chargers’ first close game since the loss to Washington County. Once in the finals, Jonathan Gess’ team dominated once again, posting a 33-0 shutout. Between Keyante Green, D.J. Curl, Brad Moore and Dalton Etheridge, the ELCA attach could not be stopped. Green had an incredible touchdown run early in the game and another amazing scoring scamper in the second half. Etheridge was efficient in the passing game, going 7-for-8 for 107 yards. As well as ECI played in the Class A-Public finals, anyone at the Georgia Dome that watched both teams played could easily see that ELCA is the best team in all of Class A for the 2012 season.

The Buford Wolves captured the program’s fifth state title in the last six seasons Friday, pulling out a close 10-3 win over St. Pius X. The scary part for the rest of Class AAA is that most of the playmakers from this squad will return in 2013. Both Buford quarterbacks, Montgomery VanGorder and Taylor Mitchell, are just juniors, and several other offensive standouts should return next season, including receiver Tre’ Neal, running back Zavior Hoxie and tight end Deion King. The offensive line also returns several stalwarts. Defensively, Korie Rogers will be back along with Thomas Wilson to provide some punch. Meanwhile, St. Pius X gave an incredible effort, hanging around until the very end. The running game could not get cranked up as the Lions were held to just 104 yards, well below the season average. Quarterback Jack Spear could never connect with his potent weapons as Nick Ruffin had just one catch for 16 yards while Ryan Braswell totaled just 71 rushing yards on 15 carries.