Three Titles To Be Decided Friday 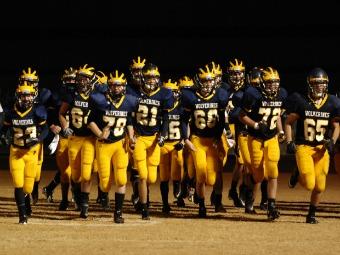 The Class A-Private championship will get the weekend off on the right foot. Prince Avenue Christian and Eagles Landing Christian will both look to control the line of scrimmage with effective running games in an attempt to dominate time of possession. ELCA has the more impressive collection of athletes with Isaac Rochell (Notre Dame) and Keyante Green (Purdue), but Prince Avenue Christian has its own set of playmakers that keep the scoreboard buzzing. Carl Mattox almost never leaves the field for Wolverines head coach Mark Farriba. The running back-defensive back is always in on the action and Jonathan Gess’ Chargers should always account for him. If Green is healthy for ELCA, look for him to be moved all over the field on offense. If too much attention is paid his way, Chargers quarterback Dalton Etheridge can burn you with his arms and his legs. This game will be won when one squad finally cracks the other side’s stout defense and forces the opposition to play catch up.

The AAA title will be up for grabs when Buford faces St. Pius X. While the Buford Wolves will be making the program’s sixth straight appearance in the GHSA finals, the St. Pius X Golden Lions will be in the finals for the first time since winning the GHSA Class AA title in 1968. Jess Simpson’s Wolves have an offense that likes to get out and run, though don’t sleep on Buford going play-action to some capable playmakers on the outside. St. Pius X will have its hands full trying to stop Dontravious Wilson and Zavior Hoxie, but the Golden Lions have their own powerful running game to try and keep Buford’s offense on the sidelines. Paul Standard’s attack is triggered by Jack Spear, who can run it or pull back and throw it downfield. The Golden Lions have some fine athletes that could offer a different look than past editions of St. Pius X.

The key in this game will be which offensive line controls the opposition’s defensive line enough to spring the running game. St. Pius X’s Ryan Braswell can run for days, but if Buford linebackers Korie Rogers and Bryson Jordan stuff him early and often, the Wolves have enough power in the defensive secondary to turn over the ball and set up the offense.

In the AAAAA final, it is a classic case of the immoveable object (Ware County defense) and the unstoppable force (Gainesville offense). The Gators come in with five shutouts this year, including a 14-0 win over Stephenson in the quarterfinals. Ware County also limited explosive Northside-Warner Robins to just 17 points in the semifinals. On offense, QB Jamar Johnson presents a threat running and passing while RB Xavier Tobler, a Georgia Southern commit, pounded the Northside defense for three touchdowns last week. Gainesville’s offense starts and ends with QB Deshaun Watson, who has put up video game numbers all season. The Clemson commit will try to do it all today for the Red Elephants who have gone over 60 points twice in the playoff already, mostly due to Watson’s play-making ability. However, the Gainesville defense also deserves kudos, as the unit held Whitewater star RB Kendall Conley to just 91 yards last week in the semis.