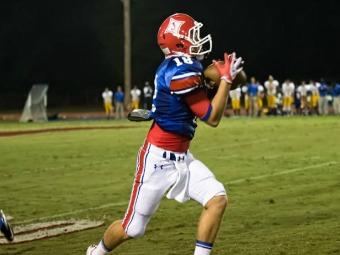 Four more GHSA football titles will be decided Saturday at the Georgia Dome. The Class A-Public, AA, AAAA and AAAAAA champions will be crowned after an intense day of football.

Perhaps the best player in the state of Georgia will be on display when Dooly County’s Montravius Adams lines up at defensive tackle to try and slow ECI’s rushing attack in the Class A championship. The Bulldogs feature quite the three-headed rushing attack with Greg Purcell, James Brown and Michael Sutton, but the Bobcats of Dooly County have been limiting offenses throughout the postseason. ECI will look to run its Wing-T attack against the Bobcats to try to neutralize, or at least wear down, Adams. Bulldogs quarterback Caleb Pressley is comfortable in the offense, a recipe for disaster for opposing defenses. The matchup to watch may be how Dooly County’s offense fares against a stout ECI defense that hates giving up points. A.J. Smith can impress with his arm, but the offense had trouble getting going against Lincoln County. The offense could receive a boost by Adams in special goal line situations as he is a load to stop.

Both Calhoun and Jefferson possess a strong one-two punch in the backfield in Class AA. Calhoun has coach Hal Lamb’s nephew Taylor at QB and Alex Urbano at RB. Lamb was limited to a career-low 63 passing yards in the semifinal against Lamar County, but ran for 83. Urbano, however, pitched in 160 yards and two scores on the ground for the Yellow Jackets. Jefferson will try to match Lamb and Urbano and raise Calhoun with QB Bryant Shirreffs and RB Tristen Jackson. The pair combined for 213 rushing yards in the semifinal win over GAC while Shirreffs also tossed two touchdown passes. Calhoun comes in with plenty of finals experience along with a 29-game winning streak. Jefferson just set a school record with 13 wins and has won all of those games after a season-opening loss to rival Commerce.

A star-studded cast will highlight the Class AAAA matchup between Ridgeland and Sandy Creek. QB Cole Garvin, WR Damarre Kitt, OL Alan Knott and DB Shaq Wiggins are all major college prospects while Ridgeland counters with two-way athlete Vonn Bell, who is being pursued by Alabama, Ohio State and Tennessee, and RB Darrell Bridges, who rushed for 182 yards and two scores last week in the semifinals while also completing three passes for 110 yards and two more scores. If experience in big games counts, Sandy Creek would have a major edge here. The Patriots have played in two finals in the past three seasons prior to this year while making the playoffs each year since 2002. Ridgeland, however, is somewhat of a Cinderella story after winning 13 games this year, four more than the previous program best. It should be interesting to watch which program rises to the challenge today with all the chips on the table.

Finally in AAAAAA, two explosive offenses will go head to head when Lovejoy faces undefeated Norcross. The Blue Devils defeated the only team to topple Lovejoy this season (Colquitt County), but the Wildcats have won 12 straight since falling to the Packers in the second week of the season. The offenses start with a pair of 2,000-yard running backs in Lovejoy’s Travis Custis and Norcross’ Alvin Kamara. Both are dangerous with the ball in their hands. The two quarterbacks shouldn’t be overshadowed as Lovejoy’s Alejandro Bennifield is smooth in the backfield and can throw it all over the yard while Joseph Wilber is lethal with his mistake-free passing style and moxie that showed in the semifinal victory. Defensively, each team will bank on pressure being provided up front to let two opportunistic secondaries make plays. Fans may want to track the sack totals of Lovejoy’s Nathaniel Norwood and Norcross’ Lorenzo Carter.