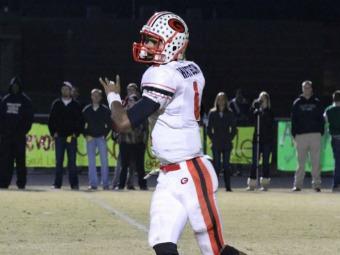 The Gators are bidding for their first state championship in school history in their third appearance. After reaching the title game in 1961, they most recently made it back in 2007—when they fell to Northside-Warner Robins 20-14 for the Class AAAA championship. This season got off to a relatively inauspicious start, when Ware County lost to Coffee, a Class AAAAAA opponent, but one that ultimately failed to make the playoffs. Nonetheless, the Gators have won 13 in a row since that initial setback, including 11 straight against Class AAAAA competition. Only three wins have come by fewer than double-digits and none was more thrilling than a semifinal showdown against none other than Northside-Warner Robins. Ware County squandered all of a 17-7 lead in the final 30 seconds after surrendering a touchdown, an onside kick and a field goal. The Gators recovered with an overtime touchdown run from Xavier Tobler before stopping the Eagles on their ensuing possession.

Tobler rushed for 140 yards and scored all three Ware County touchdowns in the semifinal victory. The senior running back has been the driving force behind the Gators’ offense all season and is taking his talents to Georgia Southern next year. It has to be said, however, that head coach Ed Dudley’s team relies on its defense. The unit is allowing just 8.6 points per game and boasts five shutouts. Ware County held Stephenson to 63 yards of total offense in a 14-0 quarterfinal blanking and Northside-Warner Robins’ 17 points were its fewest of the season. The Gators have not surrendered more than 24 points in any contest. Senior cornerback Tremon Porter had two interceptions in the victory over Stephenson. Tobler, who also stars at linebacker, returned a fumble for a touchdown in a playoff-opening rout of Lakeside-Evans—which managed only six rushing yards.

Will the seventh time be the charm for Gainesville? The Red Elephants have been to the state championship game on six previous occasions, but not once have they taken home the title. They last reached the final game in 2009, getting edged by Peach County 13-12. It did not always look like this would be the year in which Gainesville would get over the hump, as it lost three games—including two in a row at the end of the regular season. But the team’s three setbacks came by a combined eight points. The Red Elephants were never particularly cold, but they have gotten scorching hot at the right time. All four playoff victories have come by at least 14 points and they hammered Region 1 top seed Harris County 64-13 in the quarterfinals.

While Gainesville’s offense has been consistent from start to finish, it peaked for the playoffs. Head coach Bruce Miller’s squad is averaging 45.1 points per game for the year and 48.5 in the postseason. Junior quarterback Deshaun Watson, who has already committed to Clemson, is borderline unstoppable. On the season, Watson has 3,707 yards passing and 1,356 rushing while accounting for 69 total touchdowns. With one more year still to play, Watson is poised to break the Georgia state record for career passing yards on Friday (he is a mere 30 yards short of the record). He exceeded the 9,000-yard mark in a 28-14 semifinal victory over Whitewater. Two of Watson’s favorite targets are senior Caleb Hayman, committed to South Alabama, and sophomore Rodney Lackey. Sophomore running back Michael Byrd is another force out of the backfield. Gainesville’s defense, led by junior linebacker Devan Stringer, has stepped up of late. The unit limited Whitewater 2,000-yard running back Kendall Conley to 91 yards on 24 carries in the semis.