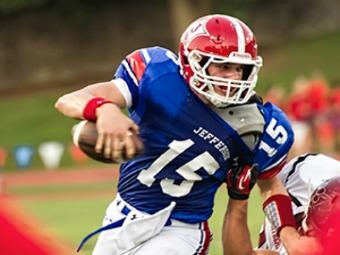 Jefferson will face Calhoun this Saturday at the Georgia Dome at 2:30 p.m. for the GHSA Class AA title.

These are not entirely uncharted waters for Jefferson, but they aren’t exactly navigated on a regular basis, either. This is the Dragons’ third appearance in a state championship and first since 1977 (they lost at the final hurdle in ’75 and ’77). In fact, Jefferson had not reached the quarterfinals since that run in 1977. The program suffered second-round defeats in 2003, 2007, 2008 and 2009. This season’s campaign almost came to a halt in Round 3. Thriller after thriller has been played around the state in these playoffs, but perhaps none has been more chaotic than Jefferson’s nail-biter against Fitzgerald. The host Dragons blocked a field goal to force overtime before Fitzgerald blocked a PAT to force a second overtime. After trading touchdowns and two-point conversions in the second extra frame, Jefferson answered another Purple Hurricanes’ touchdown with a score followed by a clinching two-point conversion to win it 53-51.

Senior quarterback Bryant Shirreffs has been getting it done with both his arm and his feet for Jefferson, which is riding a school-record 13-game winning streak. In a 35-7 second-round win over Westminster, Shirreffs rushed for 248 yards and passed for 88 more while accounting for four total touchdowns. Against GAC in the semis, Shirreffs again had four touchdowns while exceeding 100 yards through the air and on the ground. A lethal running game also features junior halfbacks Isaiah Blake and Tristen Jackson. The Dragons are averaging 44.3 points per game in their last 11, but the defense cannot be overlooked. In its last 10 outings, Jefferson has held opponents to seven points or fewer seven times and only once has an opponent scored more than 14 points. Senior linebacker Wesley Simonton had 14 tackles-including three for a loss-against GAC.

The Yellow Jackets are through to their fifth consecutive Class AA state championship game after getting past Lamar County 21-14 last Friday night. On all four previous occasions they faced Buford-which currently finds itself in the Class AAA final-for the title. Calhoun lost in 2008, 2009 and 2010, but finally toppled the Wolves 27-24 in overtime last season. The program has won 29 consecutive games since a 31-24 heartbreaker against Buford in the 2010 championship game. This year’s squad is 14-0 and beating opponents by an average score of 45-14. Only two teams have come within double digits of Calhoun: Lamar County in the semifinals and Ridgeland (which is playing for the Class AAAA title) in the season opener. The Jackets have scored at least 34 points in 13 of 14 contests and the defense has posted four shutouts. In its last 10 outings, Calhoun is giving up a mere 6.5 points per game.

The Yellow Jackets’ high-powered attack is led by senior quarterback Taylor Lamb, who was named the 2012 Georgia Gatorade Player of the Year. In 2011, Lamb led the state with 3,638 passing yards to go along with 40 touchdowns. This season, he has passed for 3,229 yards and 34 touchdowns at the expense of just five interceptions. Lamb, who has committed to South Alabama, will be looking to bounce back from being held to a career-low 64 yards through the air against Lamar County. Senior running back Alex Urbano stepped up with 160 rushing yards and two touchdowns. The Jackets’ ever-improving defense is headlined by senior cornerback Donnell Anthony, who preserved last week’s victory with an interception in his own endzone late in the fourth quarter. Calhoun has forced 10 turnovers through four playoff games, four thanks to Anthony interceptions.