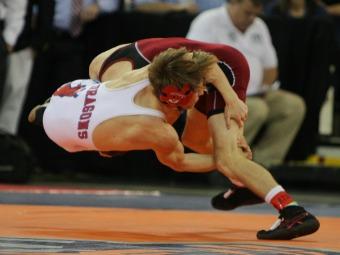 Class AAAAAA No. 2 Archer won two meets over the weekend as two squads traveled to separate meets to compete. The Tigers won the Danny Boyd Duals in Osceola, Fla., and went 8-0 in the meet. Among others, Archer defeated defending Class AAAAA state duals champion and current AAAAAA No. 3 Camden County as well as the host squad, Osceola, one of the top teams in Florida. The Tigers beat Osceola 39-22 and Camden County 40-20. In the win over Camden County, M.J. Couzan, Ernest Alexander, Elliott Lee, Zach Wright, Christopher Diaz, Michael Aycox, Sam Bullard, DaQuan Olbert and Vinny Artigues each won their matches. The other Archer team won the Brookwood Invitational with 125 points, edging out Class A No. 3 Commerce, which scored 121.5. Orlando Nawade and Brandon Weber each won their weight classes for the Tigers.

Mt. Zion-Carroll won its own tournament Saturday by taking the 10th Annual Screamin’ Eagle Meet. It is the first time in event history that the hosts have won. Mt. Zion finished with 196 points, ahead of Pepperell (second place), Villa Rica (third) and seven others squads. Ashton Robinson, Jesse Henderson and WIll Sizemore each won their weight classes for the Eagles.

Roswell came in second Saturday at the Morgan County Christmas Classic with 246.5 points behind tournament champ Banks County, which totaled 260.5.

Creekview defeated Pickens 51-18 on Dec. 5 in a dual match. The Grizzlies then won the Creekview Invitational Saturday by knocking off Allatoona and Chestatee, which finished tied for second place, and 14 other squads. Sorrentino was named Most Outstanding Heavyweight wrestler after pinning his opponent in the finals of the 195-pound class.