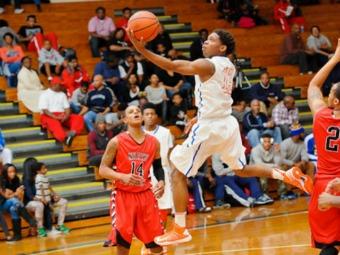 The Nike Explosion Showcase was the first real chance for players to play their way onto the Score 44 as top teams from across the state matched up against one another. Berkmar’s C.J. Foster had 24 big points, albeit in a loss to Peachtree Ridge. He scored 32 points earlier this year against Morgan County after averaging nearly five points per game one year ago as Berkmar’s defensive stopper. The combo guard is ready to take on more his senior year. Tahj Shamsid-Deen of Columbia had 27 points in a narrow loss at the Nike Explosion Showcase at Wheeler last weekend. Monroe’s Jabari McGhee has impressed one opposing coach enough with his strong play thus far this season. After McGhee torched Albany for 33 points, including the game-tying, buzzer beater to send the game to overtime, Archie Chatmon called McGhee “the best player in South Georgia.” Finally, Kyre’ Hamer of Miller Grove is new to the list.

* Gray, the 2012 Georgia Gatorade player of the year, is injured and will likely miss the season