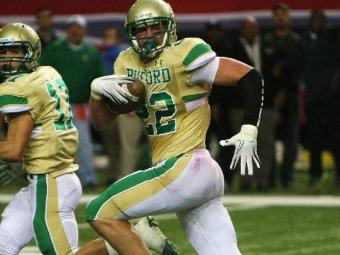 Undefeated Cartersville (13-0) ended the season of previously undefeated Thomson in the AAA quarterfinals, but the Buford Wolves (10-3) await in the semifinals and offer a daunting task. The strong Purple Hurricanes defense has held six opponents to seven points or fewer this season, but Buford has scored at least 31 points per game since falling to Gainesville in early September. Last week the Wolves posted a 31-7 win over Carver-Columbus in Columbus. Quarterbacks Taylor Mitchell and Montgomery VanGorder have shared the signal-caller duties all year with Zavior Hoxie, Dontravious Wilson and Joshua Thomas leading a talented backfield. Wilson just eclipsed the 1,000-yard mark for the season. Jaylon Mize and Mikey Bart are two-way stars while Josh Cardiello and Nick Polino are studs on the offensive line. Buford is in the semifinals for the sixth straight season, the longest current streak in GHSA football. The Wolves conquered Cedar Grove (41-27), North Oconee (13-0) and Carver-Columbus to reach the semifinals. Buford also owns a victory over another AAA semifinalist, North Hall, from earlier this year. Two of Buford’s losses this year were forfeited wins.

Cartersville’s defense has been opportunistic all year, but the offense has also helped Frank Barden’s squad reach the semifinals for the first time since 2004. Quarterback Brooks Barden has led the offense to 40 points per game this season. Opposing defenses may be catching up to the Purple Hurricanes’ offense, though, as the last two weeks, Blessed Trinity held Cartersville to 24 points in a 24-23 loss and Thomson gave up just 21 points in an eight-point loss. Cartersville opened the playoffs with a 56-21 thumping of Jackson County. It has been quite a turnaround for Barden’s team, which finished 5-5 last season.

In the other semifinal game, North Hall (11-2) travels to St. Pius X (11-2) after taking out Peach County 52-10 last week. Bob Christmas’ Trojans have scored at least 32 points 10 times this year. Outside of a 45-16 loss to Buford on Nov. 9, North Hall has not given up more than 27 points in a game this season. In the Trojans’ 11 victories, the team is averaging 44.7 points per game. Opposing offenses average just 13 points per game this year against North Hall, just 10 points per game if you take out the Buford game. Offensively, Kevin Christmas has been at the forefront of a different offensive look for the Trojans. T.J. Tate and Zac Little also get into the action on the ground, as does quarterback Brad Brown. North Hall has knocked off Woodward Academy (38-7), Morgan County (13-9) and Peach County en route to the semifinals.

St. Pius X has stepped up its offense through the first three weeks of the postseason, averaging more than 47 points per game after averaging just 31 during the regular season. Quarterback Jack Spear leads the offense, but junior playmakers Nick Ruffin, Branden Mitchell and Nick Glass do their part for Paul Standard’s offense. Mitchell rushed for a pair of scores and 164 yards against Washington County in the quarterfinals. Both Ruffin and Glass are also outstanding defensive backs that already have recruiters drooling. If Standard’s offense keeps humming along, the defense, with three shutouts and two other games where the opposition scored fewer than seven points, has the potential to shut down North Hall’s running attack.