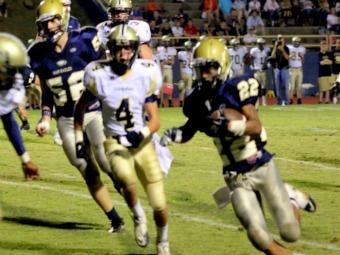 The GHSA seeded out the 16 teams in the Class A public school bracket, and so far with one minor exception, the brackets have played out according to plan. Dooly County (10-2) is the lone team that upset the order, as the No. 5 seed Bobcats "upset" No. 4 Seminole County 34-28 in the quarterfinals. Montravius Adams is a beast at defensive tackle as at 6-foot-4, 310 pounds, he is listed as the No. 1 player at the position by 247sports.com. Offensively, quarterback A.J. Smith is more than capable of carrying a team. Smith passed for 255 yards and four scores in the win over Seminole County in the quarterfinals. Dooly County has not lost since Oct. 19, a 12-7 defeat to Marion County. The playoffs have seen the Bobcats roll off a 19-8 win over Turner County and the win over Seminole County. Jimmy Hughes' Bobcats lost in the first round of the playoffs last season and had not reached the semifinals falling in the Class A 2002 finals.

The No. 1 Lincoln County Red Devils (11-1) advanced past Wilkinson County 28-22 thanks to tailback Mike McIntire and QB Ben Turner. McIntire eclipsed the 100-yard mark with two scores while Turner passed for 232 yards. Larry Campbell's team also received a punt return for a score to advance to the semifinals for the first time in five seasons. The Red Devils currently boast a 10-game winning streak and knocked off Hancock Central 21-0 and Wilkinson County to reach the semifinal round. Lincoln County has captured nine Class A titles since 1985 and Larry Campbell has led the Red Devils to 11 of the school's 14 state titles. Over his 41 seasons, Campbell is the winningest coach in Georgia high school football history with 470 wins.

Wilcox County (10-2) is paced by QB Makail Grace. This year, he has passed for 3,054 yards and 29 touchdowns and run for another 866 yards and 10 scores. One of his favorite targets is 6-foot-5 Jonathan Howard, who has snagged 98 passes for 1,420 yards and 17 touchdowns. Howard reeled in three scores in the team's 39-21 win over Marion County in the quarterfinals. The team opened up the postseason against Greenville with a 42-14 victory. Mark Ledford is a fine coach for the Patriots and last week's win was No. 100 with the program. He has been with the program since 2001. Wilcox County has now also reached 10 wins for the sixth straight season, including the 2009 championship. Ironically, the 2009 season was the last time Wilcox County reached the semifinals.

Emanuel County Institute (11-1) awaits Wilcox County with James Brown and Greg Purcell ready to run wild if given the chance. ECI rushed for 439 yards in a 46-12 win over Gordon Lee in Round 1 action and then the team used Brown and Purcell to put away Trion. Brown has rushed for 332 yards in the postseason and Greg Purcell passed the century mark with 103 yards against Gordon Lee. Two other ECI backs have racked up at least 400 yards rushing this season. Caleb Pressley is a two-sport star and brings plenty of athleticism to the quarterback position for Chris Kearson's Wing-T offense. He has thrown for nearly 1000 yards and had a touchdown pass in the last game. ECI is back in the semifinals for the first time since making the finals in 2008. The team last won the state title in 2007 under former coach Milan Turner, who is now the Thomson head coach.

After soundly defeating the defending Class A champions in the quarterfinals, Eagle's Landing Christian Academy (11-1) now prepares to host No. 11 seed George Walton Academy (9-3). The Chargers hope to be sparked by their do-everything RB/LB Keyante Green. Green has played all over the field for coach Jonathan Gess when healthy. He missed chunks of the season and sat out last week with a high ankle sprain. Dalton Etheridge is back at quarterback after missing time with his own injury. He helped the offense rack up 407 yards with his legs (three scores, 69 yards) and arm (two touchdown passes) in a 42-7 quarterfinal victory over Savannah Christian. Defensively, Isaac Rochell is a star at defensive end and will play at Notre Dame next year. Gess' team fell in the semifinals last year to finalist Landmark Christian. This year's team has beaten Landmark Christian once during the regular season while also beating Holy Innocents' before taking out Our Lady of Mercy 42-14 in Round 1.

George Walton Academy has a stud at running back in junior Stanley Williams. After rushing for 224 yards in the Round 1 win over Aquinas, Williams scored twice to go with 251 yards on 17 carries in a 37-7 victory over Walker in the quarterfinal round. He now has 24 touchdowns on the season. If ELCA can shut down Williams, George Walton Academy may struggle to find other avenues of producing yardage. The team managed 370 yards against Walker, 251 coming from Williams. Don Williams' squad can certainly say it is battle-tested. The 9-3 mark includes wins over First Presbyterian, Holy Innocents', Commerce, Prince Avenue Christian and Athens Christian, as well as the 38-12 win in a rematch over Aquinas and the victory over Walker. The team also fell this season to Athens Academy by one point. This is George Walton's first trip to the GHSA semifinals.

Prince Avenue Christian (10-2) will face Landmark Christian after upsetting No. 1 Athens Academy in a rematch of a game played earlier this season. The Wolverines defense stood tall in the 24-7 win, registering sacks, forcing two fumbles and intercepting two passes. Carl Mattox rushed for 121 yards and a score to give coach Mark Farriba the win over Athens Academy. Mattox also stars in the defensive secondary. Christian Payne blocked a punt and had a pair of sacks in the quarterfinal victory. Prince Avenue previously took out Darlington 42-21 on the road. This will be Prince Avenue Christian's first home playoff game in 2012. The team fell to George Walton Academy in the final game of the regular season but previously rattled off eight wins in nine games, including victories over playoff teams such as Savannah Christian, Athens Christian and Commerce. Prince Avenue reached the semifinals last year after reaching the postseason for the first time in program history in 2010.