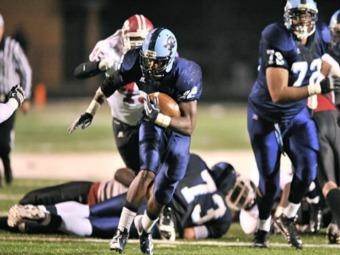 The Lovejoy Wildcats may just have most athletic team left in the Class AAAAAA playoffs. In defeating North Gwinnett Friday, Lovejoy showed that its athletes cannot be blocked on defense and barely stopped on offense. Alejandro Bennifield is a star at the quarterback position, especially with his talented running back Travis Custis sucking in the opposing defenses, allowing Bennifield to find Jumichael Ramos and A.J. Jackson deep. Al Hughes’ team fell short last year of a title. If Lovejoy goes 14-1 this season, however, it will mean a state title.

Give a ton of credit to North Gwinnett quarterback Michael Haynes. He was hit hard all night against Lovejoy, yet he kept bouncing back. Haynes played the last few weeks with a leg injury that he was able to play through. He was a warrior to play through pain and should be commended. When rattling off the long list of great North Gwinnett quarterbacks over the last few seasons, Haynes’ name should certainly be included along the likes of Tamburo, Uzomah and Hosch.

This just in: Alvin Kamara just made another big play against Camden County. Norcross head coach Keith Maloof certainly was not afraid to move Kamara around Friday night, playing him some in the Wildcat formation, having him throw for a touchdown and rush for 158 yards and another score. While Joseph Wilber is Norcross’ starting quarterback, Maloof has found something with Kamara in the wildcat. Rush Propst should expect to see plenty of that this Friday.

Some are calling it the greatest high school football game ever played. Hyperbole aside, Jefferson survived a thriller against Fitzgerald 53-51. However, T. McFerrin and his team must put the game in the rearview mirror as GAC pays Jefferson a visit. The Spartans have weapons on offense that will certainly give the Dragons a run for their money.

Monroe Area head coach Matt Fligg confirmed to Score that Sandy Creek is in fact bringing in extra bleachers in order to host the AAAA semifinal showdown between the two region champs. Sandy Creek won the coin toss Sunday morning to earn the right to host, but the Patriots will need to bring in extra seating. Whatever the program plans on bringing in, make sure it is enough because this entertaining game is sure to bring out plenty of fans even without a rooting interest. Sandy Creek has some real talent that football fans will want to see, just as Monroe Area does.

Let’s give the GHSA credit for seeding the Class A public bracket. No. 1, 2, 3 and 5 made the semfinals with No. 4 Seminole County falling to No. 5 Dooly County by just six in the quarters. The GHSA and its formula was nearly spot on and no one can complain about the teams still alive, including Lincoln County, Wilcox County and ECI.