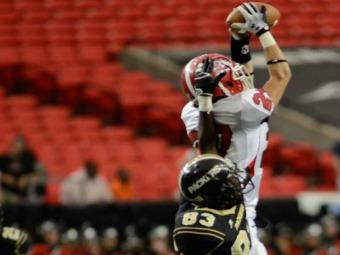 ELCA looks poised to win its second state title ever after a thorough 42-7 defeat of reigning champion Savannah Christian. The Chargers have been close many times since their last title, but look like they will not be denied. Star RB Keyante Green did not even play on offense (and only played a few plays on defense) but coach Jonathan Gess’ squad rolled anyway, past a solid SCPS squad. The Chargers lost one game all season – to Class AAA quarterfinalist Washington County in the season opener – and have beaten every other team on their schedule by at least 25. There may be no stopping ELCA this time.

Kudos to Lamar County coach Franklin Stephens, who left perennial juggernaut Tucker for his alma mater after last season’s state title. Some questioned why Stephens would leave a program like Tucker from the media metropolis that is metro Atlanta for a program in a smaller classification, but it is time to give the man his due. The Trojans, from Barnesville, moved into the semifinals after a stirring 34-28 win over Lovett. A win over No. 1 Calhoun in the semifinals would make Stephens’ homecoming story even sweeter.

Some said Buford’s move up to Class AAA would make it tougher for the Wolves to win the state title. The Buford program won seven state titles (one in A, six in AA) from 2001 to 2010 before losing in the finals last year to Calhoun. Now, Jess Simpson’s squad looks like the best team remaining in AAA. Buford has a lot of detractors, but even they must admit that the Wolves are perennially one of the best programs in Georgia, regardless of classification.

Colquitt County proved once again Friday what was mentioned in this space last week: the Packers come to play in November. Rush Propst points to this time of year, and his teams have responded with four straight semifinals berths. However, the Packers have yet to win a state title under Propst, and the sledding gets even tougher now. A road game at undefeated Norcross makes four straight trips to metro Atlanta in the postseason for Colquitt. Can the Packers again win after a long bus ride? In 2009, the Packers won three straight road playoff games, but fell in the semis at Camden.