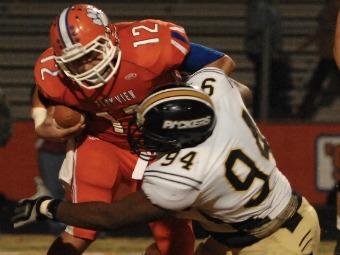 St. Pius X, Calhoun and Ridgeland all won coin flips Saturday to determine home field advantage for the GHSA semifinals. St. Pius X will host North Hall in the semifinals after each pulled out wins over Washington County and Peach County, respectively. A coin flip was necessary as both teams won their regions.

Marist will be hitting the road as well to face Ridgeland after losing a coin flip Saturday. Marist lost a coin flip last week and traveled to Stockbridge to pick up a 15-7 win. Interestingly enough, next Friday will be Marist’s eighth road game of the 2012 season. Ware County won the coin toss against Northside-Warner Robins on Sunday. The two region champions will play in Waycross.

The coin flip to determine home field advantage for Sandy Creek-Monroe Area was scheduled for Sunday. Sandy Creek won the coin toss over Monroe Area; however, Sandy Creek’s home field does not meet the GHSA permanent seating requirements needed to host a playoff game beyond the third round. Per GHSA rules, the total seating capacity for Class AAAA must be 4,000. According to the GHSA website, Sandy Creek will host the game. The Walton Tribune also noted that Monroe Area will travel to Tyrone for the semifinals