Tucker, Northside To Clash Once Again 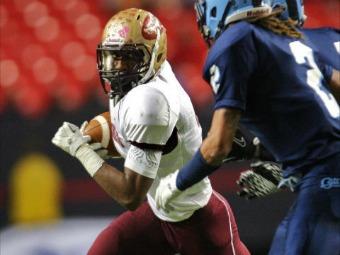 After dominating Class AAAA for a few years, Northside-Warner Robins and Tucker have taken their acts to Class AAAAA, where they have each continued their winning ways. The programs combined to win four state titles in AAAA from 2006 to 2011 (Tucker in ’08 and ’11, Northside in ’06 and ’07) and are a combined 22-2 this year in Class AAAAA. But unfortunately for Georgia high school football fans, one of these two juggernauts will be eliminated tonight. The winner, however, will become the odds-on favorite to win it all.

The defending state champion Tigers are in the final eight for the fifth time in sixth seasons and did it without former head coach Franklin Stephens, who resigned to take over the head job at Lamar County after last year’s championship. First-year coach Bryan Lamar has made it a nearly seamless transition in guiding the No. 8 Tigers to a 10-2 record and yet another quarterfinals berth. Tucker will try to get its ground game going on Northside, as the Tigers’ Wing-T offense led DeKalb County with 266 rushing yards per game and have four players who average more than 50 yards per game in junior Dallas Rivers (90.5), senior Yusuf Minor (84), junior Dominick Sanders (56.1) and senior QB Juwaan Williams (53.9). Williams, who has offers from Clemson, Florida State, Notre Dame, Oregon and others, has attempted just 74 passes all year, but has totaled 668 yards and eight scores through the air. Senior offensive lineman Alexander Hayes at 6-foot-3, 280 pounds, leads the way for the Tigers, while junior defensive tackle Elisha Shaw, who has been offered by Alabama, Florida State and Georgia, heads a defense that pitched three shutouts this season and holds opponents to 12 points per game.

While Tucker pounds the ball out of the wing-T, Northside prefers to run out of the spread option. The Eagles rely on QB Glenn Smith and RBs Keshun Hill and Curtis Martin, who combined to rush for 2,665 yards and 31 touchdowns this season behind a veteran offensive line. The Eagles’ defense has allowed more than 18 points just once this season and is led by senior LB Trey Payne and senior DT Anfirnee Chatfield.

Tonight’s meeting will be the third between the powerhouse programs with the series tied at one after two semifinals showdowns. Tucker won last year’s meeting with a dramatic 17-16 win while Northside came back from a 28-7 halftime deficit to win 31-28 in 2007 at the Georgia Dome.

Perhaps overshadowed a bit by the mammoth showdown between Tucker and Northside is the Ware County-Stephenson matchup. Both teams are ranked and have been very successful in recent years, although neither has won a state title. Coach Ed Dudley moved to Waycross after the 2008 season from Walton and has since led the No. 7 Gators to three consecutive quarterfinals appearances with 10 wins or more. Dudley’s bunch will host a group of Jaguars who prefer to run the ball, as evidence by the squad’s 215 yards per game average on the ground. The Jaguars average 33 points per game and give up just 15.7.

On the other side of the bracket, surprising Harris County hosts high-scoring Gainesville in what could be a wildly entertaining quarterfinal. The host Tigers began the season with four straight losses, but rebounded to win their last eight and the Region 1-AAAAA title. Tommy Parks’ club has already set the school record for wins, according to GHSFHA.org.

Gainesville will arrive in Hamilton averaging 45 points per game, but have traditionally struggled on the road in the playoffs. Despite winning last week at Kell, Gainesville has won just two of its last 14 road playoff games. Junior QB DeShaun Watson did not seem to care about that stat, however, in last week’s win. The Clemson pledge ran for five touchdowns and threw for three more against a normally stout Kell defense. Watson has totaled 61 touchdowns this season.

In a ranked duel, No. 10 Allatoona will visit No. 5 Whitewater in a battle of two relatively new metro Atlanta programs. The visiting Buccaneers, who began playing football in 2008, have not skipped a beat after moving up two classifications in the offseason. Last week, Gary Varner’s squad rallied for two fourth-quarter touchdowns to defeat No. 3 M.L. King on the road. QB Jeremy Uzee was an efficient 15 of 22 for 176 yards with touchdowns passes to Tommy Davis and Clarence Soleberry.

Meanwhile Whitewater, which played its first season in 2004, is remembered by many for upsetting Northside-Warner Robins in the first round of the 2010 playoffs. The Wildcats have won their last 11 games after beginning the season with a 41-3 loss to Coffee. Since that game, coach Amos McCreary’s team has scored more than 30 points 10 times and held opponents under 20 points on nine occasions.