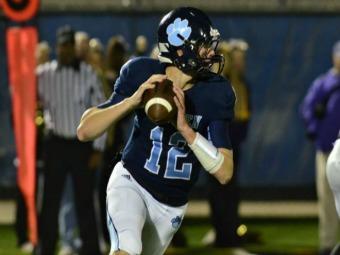 A pair of elite offenses will be moving the ball up and down the field when Region 2-AAAAAA champion Lovejoy hosts North Gwinnett, but the first defense to make a stop may come away with a spot in the semifinals in tonight’s Wildcats-Bulldogs matchup. Both Lovejoy’s Alejandro Bennifield and North Gwinnett’s Michael Haynes are members of the Score 44, but neither quarterback seems to get the attention that other elite signal callers across the state receive. A monster game from either and it will be difficult to ignore them for much longer. Defensively, Lovejoy has incredible speed, but North Gwinnett has playmakers in Dante Sawyer, Jalen Brooks and Donnie Miles.

Jacorey Lewis has rushed for 612 yards combined through the first two rounds of the playoffs, but North Cobb knows a thing or two about slowing down backs. The Warriors held Walton’s Tyren Jones to just one score in a 49-17 win over the Raiders earlier this year. The Warriors will gladly give Lewis his yards but the key will be keeping him from adding on to his touchdown total, which currently sits at 30 for the year. Meanwhile, Tyler Queen is a dual threat under center while J’Vonte Herrod can rack up yardage from the backfield. When Queen throws, Xavier Borishade, Cameron Albright and Nick Miller usually find a way to get open. The onus will be on Kelsey Griffin to provide pressure.

Camden County and Norcross should provide plenty of hard knocks as both teams are considered the best remaining in Class AAAAAA. Norcross is lousy with playmakers including RB Alvin Kamara, WR/RB Miles Autry and QB Joseph Wilber. The offense has not scored less than 20 points all season long. Defensively, DE Lorenzo Carter and CB Shon Akins will try and stop a Camden County team that is plenty capable of throwing up points in a hurry. QB Brice Ramsey has weapons J.J. Green and Antonio Wimbush behind a stout offensive line. Jeff Herron’s crew runs the Wing-T offense, but Ramsey has an arm strong enough that he will be heading to Georgia next year and could see time early.

Colquitt County’s resume of wins for 2012 has been an impressive one that includes Lovejoy, Carver-Columbus, Camden County, Newnan and McEachern. Rush Propst has his quarterback Cole Segraves playing at a high level as the senior tied the single-game passing mark two weeks ago. John Boatright, Bobby Hill and Colby Reneker offer plenty of options for Segraves, who plays in Propst’s famous spread offense that has been called “basketball on grass.” On the other side, Parkview has been through much this season, including the loss of star running back Chris Carson and quarterback Rob Youngblood for long stretches of the year. Youngblood is back under center, but his main weapon in the backfield is now Justis Rosser, who has scored the game-winning touchdowns in overtime in each of the last two games. The Panthers have seemed to right the ship after dropping two of their final three games of the regular season after a five-game winning streak highlighted the year. The team has proven with playoff wins over Walton and West Forsyth that the September win over Grayson was no fluke. Look for Cecil Flowe’s squad to once again play stout defense and rely on Rosser in the running game.