Past Champions Clash In AAAA Quarterfinals 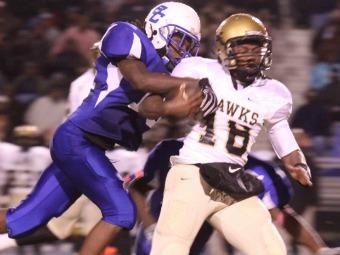 The theme of this year’s quarterfinals could very easily be something along the lines of “games that should be in the Dome,” as there are several matchups between elite teams. The Burke County-Sandy Creek showdown is a fine example.

The programs claim the past two Class AAA state titles (Burke in 2011, Sandy Creek in 2010) and now will go at it in the quarterfinals after moving up to Class AAAA in the recent reclassification. The teams have combined to go 23-1 this season, with the lone loss being Burke’s 21-14 defeat to Class AAA No. 1 Thomson in the season-opener.

No. 3 Burke County is led by junior quarterback Donquell “Gator” Green, who has rushed for more than 1,500 yards and passed for more than 1,00 this season out of the Bears’ spread option look. Green, who also plays defensive back for coach Eric Parker, holds a scholarship offer from North Carolina. The Bears have dominated the competition since their loss to Thomson, with their closest win being a 13-point triumph over Coffee, a Class AAAAAA program.

Sandy Creek, meanwhile, has cemented itself as one of the top programs in the state in recent years. The Patriots, coached by Chip Walker, won back-to-back state titles in 2009 and 2010 and have put together five straight years of 11 wins or more. Walker’s squad is led by cornerback Shaq Wiggins, a Georgia commitment who also plays offense, OL Alan Knott, a South Carolina commitment, and junior wide receiver Demarre Kitt, who has offers from 11 SEC schools plus Southern Cal, UCLA and Ohio State.

You want a Cinderella to pull for in Class AAAA? Look no further than South Effingham, the No. 4 seed from Region 3. The Rebels lost four regular season games and made the playoffs simply due to a win over Richmond Academy on Nov. 9 that gave South Effingham a one-game edge in the standings. But Donnie Revell’s squad upset No. 10 Westside-Macon in Round 1 and beat Westover last week to show up unexpectedly in the quarterfinals.

Up next for the Rebels is No. 8 Monroe Area, which comes in 11-1 and co-champions of Region 8. The Purple Hurricanes have been into one of the best turnaround stories in state history under coach Matt Fligg, as the program had back-to-back losing seasons in 2008 and 2009 but won 11 games in 2010, eight last year and 11 thus far this season.

On the other side of the bracket, No. 2 Marist jumps off the page as one of the most consistent programs in recent years. While the War Eagles have not won a state title since 2003, they have been to the playoffs 30 straight years.

QB Myles Willis, a Boston College commitment, presents a dual-threat for Marist on offense while the War Eagles’ defense allowed more than 16 points per game just twice this season. With Willis providing an elite weapon on offense and defensive ends Greg Taboada (a Stanford commit) and junior Kendall Baker (offers from Florida State and Tennessee) collapsing the pocket on opposing quarterbacks, the War Eagles are a legitimate state championship contender this season.

Marist will travel to No. 9 Stockbridge for the quarterfinals, a place where the host Tigers have not lost all season. Since a 23-0 season-opening loss to M.L. King, Stockbridge has won 11 straight and given up just over eight points per game.

The winner of Marist-Stockbridge will face either Mary Persons or Ridgeland. Being located in northwest Georgia, a part of the state not quite as rich in football tradition as other areas, Ridgeland comes as an interesting entity. The Panthers have steadily climbed to elite status under coach Mark Mariakis, who has headed the program since 2004. Mariakis’ 11-1 squad holds the best record in program history and also claims Vonn Bell, who may be the best player in school history. Bell, a senior defensive back prospect, is reportedly down to Alabama, Ohio State and Tennessee. With a close 42-35 loss to Calhoun in the season-opener, Bell and his teammate earned respect as a program. And after 11 straight wins since that loss, the Panthers have asserted themselves as state title contenders.

Facing Ridgeland is Mary Persons, a middle Georgia program that is used to playing this time of year. The Bulldogs, who won a state title in 1980, have been to the playoffs nine times in the past 12 seasons. Mary Persons is coached by Brian Nelson, who is in his first year after legendary Georgia high school coach Rodney Walker retired with 300 wins in 39 seasons as a head coach. Under Nelson the Bulldogs have won 10 games for the first time since 1998.