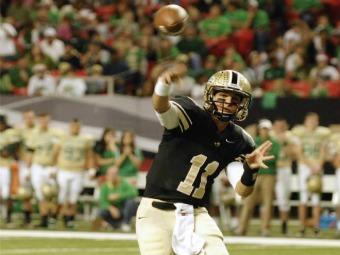 Last year, Calhoun won its first state title since 1952 after an overtime thriller in the Class AA championship game. Now, with Buford gone to AAA, the Yellow Jackets look to be the favorite for a repeat.

The Trojans have an impressive resume, having won a brutal Region 1-AA as well as defeating Class AAAAAA power Valdosta in non-region play. Brooks County showed some holes in a 22-18 first-round win over Macon County, but rolled last week to a dominating 49-21 win over McIntosh County Academy. One factor in their favor is this game will be revenge. Calhoun eliminated the Trojans from the playoffs in 2008 and 2011.

Lovett has surprised all season and emerged as the champion of Region 6-AA by beating GAC in the regular season finale. A rough early-season schedule gave the Lions a handful of losses, but coach Mike Muschamp’s squad apparently learned from those mistakes and has won six in a row when it mattered. QB Willie Candler and RB Grant Haley give the Lions playmaking ability at the skill positions while the defense has been solid all season.

Both sides of the ball will need to function at a high level for Lovett to play with No. 4 Lamar County Friday night. Coach Franklin Stephens left Tucker for this position and has made a big impact in his first year at the helm. Aside from a season-opening tie against Spalding, the Trojans have wiped out the competition in winning 11 straight. Lamar dominated a talented Cook squad in Round 1 before edging Benedictine last week.

The Fitzgerald-Jefferson matchup on the other side of the bracket offers two ranked squads and both are tradition-rich programs. No. 5 Jefferson has now won 11 games in two of the past four years under coach T. McFerrin. The Dragons breezed through their schedule after a 22-7 loss to Commerce to open the season. Last week, Jefferson beat a solid Westminster squad 35-7.

No. 7 Fitzgerald has won 10 games or more in each of the past nine seasons, and claims seven region titles since 2000; the program has not brought home the state title since 1948. In fact, the Purple Hurricanes are one of the most successful programs in the state to not have won the last game of the playoffs in recent memory. Calhoun’s championship got them off the list of long droughts between titles, leaving some to wonder whether this be Fitzgerald’s year.

In a battle of unranked up-and-coming programs, high-scoring Greater Atlanta Christian will host surprising Early County in a game that could be called “The Cinderella Bowl.” Neither team won its region and neither had a particularly impressive regular season, but each team has found a way to advance to the quarterfinals.

The GAC Spartans come into the game having scored at will in its first two playoff games. QB Rafe Chappell is one of the most prolific quarterbacks in the state, and will try to light up the metro Atlanta sky Friday night against Early County. The Spartans have totaled 87 points in their first two playoff games. GAC is trying to win 10 games for the first time since 2006 and is also trying to break into the semifinals for the first time since a finals appearance in 2002.

The Bobcats, meanwhile, come into the quarterfinals with a 9-3 record that includes a blowout loss to Brooks County, and impressive wins over Cook, Bleckley and Screven. Coach Trey Woolfe will try to lead Early County to the semifinals, where he took the Bobcats in 2001, 2002 and 2006.