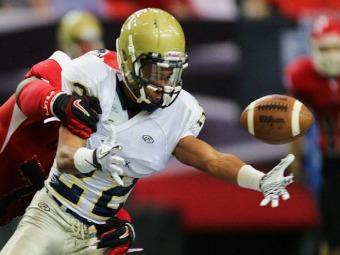 Class A’s second round takes place Friday with multiple high-profile matchups sure to catch everyone’s attention. Perhaps the best player in the state, Dooly County’s Montravius Adams, will be in action when the Bobcats face Seminole County. The Bobcats, led by the 6-foot-4, 310-pound defensive tackle rated the No. 1 player at the position by 247sports.com, have won four straight games and boast a 9-2 record. The Indians, meanwhile, have won eight straight games with Jakhari Martin under center. A linebacker last year, Martin has thrown for five scores but has also led a rushing attack that rivals any across the state. Martin has 14 scores and 875 yards rushing while freshman Thomas Aiken has 686 yards and seven touchdowns. Daquan Hamlet (634 yards, 10 touchdowns) and Javante Smith (481, seven) also contribute in the running game.

The winner of that game would face either Wilkinson County or the No. 1 team in the Class A-Public bracket, Lincoln County. These two teams faced off just weeks ago with Lincoln County prevailing 21-19 to claim the Region 7-A title. Wilkinson County quarterback David Whipple was contained by Lincoln County the first time around, but the onus will once again be on the Red Devils to slow down the Warriors’ passing attack. Look for Lincoln County tailback Mike McIntire to aid QB Ben Turner in the team’s ball-control offense.

Makail Grace is one of the state’s top juniors and the quarterback is a dual-threat under center for Wilcox County. This year, he has passed for 2,702 yards and 25 touchdowns and run for another 736 yards and nine scores. One of his favorite targets is 6-foot-5 Jonathan Howard, who snagged 86 passes for 1,280 yards and 14 touchdowns. Factor in Maurice Edwards, a receiving threat out of the backfield, and the Patriots are a threat to win their first title since 2009. On the other side, Marion County is in the quarterfinals for the first time is school history after blasting Charlton County 31-12 in the first round. Mike Swaney’s crew enters the game 9-2 and winners of three straight.

In the final game of the Class A-Public quarterfinals, Emanuel County Institute faces Trion. The Trion Bulldogs are huge up front and that helped Justin Brown’s team beat up Irwin County 31-6. Cory Bethune can throw the ball from the quarterback spot, but you are more likely to see him run as he did 13 times for 59 yards and two scores against Irwin County. Kingston Lanier toted the rock 23 times in the first round for 77 yards and one score. ECI rushed for 439 yards in a 46-12 win over Gordon Lee in Round 1 action. James Brown tallied 156 yards and Greg Purcell passed the century mark with 103 yards. Brown and Percell are just two of four backs that have at least 400 yards rushing on the season. Caleb Pressley will play baseball at the next level, but the quarterback is approaching 1,000 yards passing on the season in Chris Kearson’s Wing-T run-based offense.

A great matchup in the Class A-Private quarterfinal bracket finds ELCA facing Class A defending champion Savannah Christian. The Chargers are sparked by their do-everything RB/LB Keyante Green. Jonathan Gess finally has Green healthy and has used him on offense, defense, at Wildcat and at quarterback. In a recent win over Landmark Christian, Gess turned to Green and Marquis Griffin to fill in for an injured Dalton Etheridge at quarterback and the two combined for 288 yards rushing and four touchdowns from the QB spot. Etheridge was back last week, accounting for 302 yards of offense, including 177 on the ground. Meanwhile, Savannah Christian had to replace several key members from last year’s title team, but super athlete Jalen Myrick and senior FB Ivan Reese have made life easier for Donald Chumley’s freshman quarterback Chase Marini. Savannah Christian soared to a 28-0 lead then eased off the gas in a 35-17 win over Holy Innocents’ in Round 1.

Walker moved to 11-0 with a 28-7 win over Athens Christian last week on the legs of Evan Kasian, whose two third quarter scores pushed the Wolverines to a comeback win. The postseason win was Walker’s first in program history, but John East’s squad is anxious for more. Kasian ended up rushing for 183 yards and three scores in the win. He has 1,978 yards this season on the ground for a team that averages just less than 33 points per game. The Wolverines will face George Walton Academy and will try to slow Stanley Williams, who cruised for 224 yards rushing in a 38-12 upset win over Aquinas in Round 1. Williams also posted four touchdowns in the victory. The offensive line helped blaze the way for 425 yards as it has all season long.

Landmark Christian made the finals one year ago and has a pair of studs in Josh Nobles and Jeremiah Kirkland. Kirkland scored his team’s only touchdown in a 10-7 win over Calvary Day in Round 1. First Presbyterian has plenty of playmakers in QB Brooks Stroud, RBs Darron Moore and Reggie Gantt and receivers Michael Yopp and Scott McCormick.