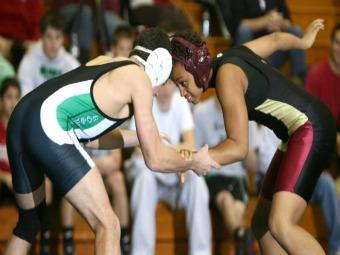 Class AAAAAA No. 2 Archer improved to 14-0 over the Thanksgiving holiday by winning three matches.

Gilmer took second at Parkview and was followed by Woodland-Bartow, Parkview, Loganville and Peachtree Ridge.

Coach Tom Beuglas’ squad will travel to Southern Slam Invitational in Greenville, South Carolina, this weekend to take on some of the top programs in the southeast.

Class AAAAAA No. 4 Kennesaw Mountain hosted two meets recently including the Horseshoe Duals on Nov. 17 and the KMHS Thanksgiving Duals on Nov. 24. The Mustangs came in second behind Class AAA No. 3 Woodward Academy in the first meet, with Cambridge (third), Southwest DeKalb (fourth) and Woodland-Stockbridge rounding out the top five.

In the Thanksgiving meet, Kennesaw Mountain won the meet and was followed by Roswell, Harrison, Valdosta and Campbell. The highlight of the meet’s individual matches, however, was Mustangs sophomore Justan Rivera going up against Buford’s Chip Ness, a junior. FloWresting.com has both athletes ranked nationally in the weight class, with Ness at No. 11 and Rivera at No. 19. Ness won the highly-anticipated match 4-3.

Forest Park hosted the Panthers Duals Saturday, Nov. 17 and watched as Class AAAA No. 5 Locust Grove beat Class AAA No. 5 Buford to win the event. The second-place Wolves lost 54-30 in the finals to Locust Grove and to Forest Park 42-40 in the preliminaries, but defeated Drew, Eagle’s Landing, Starr’s Mill and Mount Zion-Jonesboro. The host Panthers came in third place.

Douglas County hosted the Tiger Claw Duals Saturday and took first place at the meet. The Tigers finished 5-0, while runner up East Coweta was 4-1. New Manchester, Westlake and Hiram rounded out the top five.