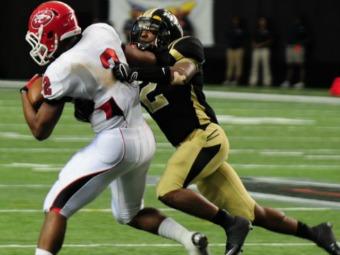 Coach Rush Propst likes to tell his Colquitt County team how important November is. Apparently, his players have bought in to their highly successful coach. For four straight years, Propst’s Packers have overcome multiple regular-season losses to advance to at least the quarterfinals of the state playoffs. And this season is no different as the No. 4 seed from Region 1-AAAAAA has won its first two playoff games to become one of eight squads still alive in the state’s largest classification. Now, the Packers have to travel to metro Atlanta for the third week in a row for a playoff game, this time to face traditional Gwinnett power Parkview, and coach Cecil Flowe, who has won four state championships in Georgia. Propst is still looking for his first, after coming to the Peach State from Alabama, where he won five state titles with Hoover. … Camden County will face undefeated Norcross in one of the most competitive quarterfinal matchups in recent memory. The two squads are arguably the two best in Class AAAAAA, as Camden was ranked No. 1 for much of the season while Norcross has yet to lose. The Blue Devils are one of three squads left from Region 7 while Camden comes from one of the toughest regions in the state on a yearly basis. This matchup of the top seeds from two tough regions meeting this early in the playoffs should cause the GHSA to look at the structure of the playoff brackets. This is a game that should be taking place later in the playoffs. … While Class AAAAAA has some great quarterfinal matchups, the next level down may be the most competitive in the state. Perennial powers like Northside-WR, Tucker, Stephenson, Ware County and Gainesville are still alive while up-and-comers like Whitewater, Allatoona and Harris County will show the state what they’re all about as well. We are blessed to have such competitive prep football in this state, but it is my opinion that 5A is the most interesting of the seven playoff brackets this season. I will certainly have my eye on this class more than any other this Friday, simply because of the quality and depth of teams remaining. … Like Norcross-Camden County, Burke County-Sandy Creek is a game that seems like it should be played deeper in the playoffs. The programs won the last two AAA titles (Burke County last year) and there is a good chance the winner of Friday’s game will win this year’s title in Class AAAA. … In Class AAA, Buford and Carver-Columbus are meeting for the fourth time in three seasons and the third straight year in the playoffs. Along with Thomson, the winner of this game will be a favorite for the state title. … Calhoun is the odds-on favorite in AA, but will face a stiff challenge from Brooks County Friday. The Trojans won the highly-competitive Region 1 and will now face Calhoun for the second straight year in the playoffs. The Yellow Jackets won last year’s second-round meeting 43-30, by far their closest playoff game before the overtime win in the finals over Buford. … In Class A, the second-round showdown between ELCA and defending state champ Savannah Christian looms large.