Carter Steps Up For South Gwinnett 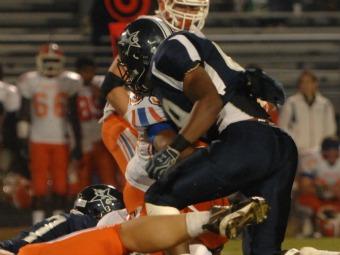 The Buford Wolves may officially have a record of 8-4 over their last 12 games, the Wolves improved to 25-1 in the postseason since 2006. Jess Simpson took care of business Friday, dispatching Cedar Grove 41-27 and limiting Johnathon McCrary to 203 passing yards. Zavior Hoxie and Joshua Thomas led the Wolves’ attack on the ground while Montgomery VanGorder found success through the air in the win.

Milton’s Carl Lawson saw his prep career come to an end Friday despite three sacks from the current Auburn pledge. It was a sack by UGA commit Reggie Carter of South Gwinnett, however, that really influenced the game. South Gwinnett scored 27 points in the first half, only to see Milton rally to within seven with less than four minutes to go. Carter was able to get to Milton QB A.J. Bush with less than one minute to play, pushing the Eagles back 10 yards and forcing a desperation heave with just 1.8 seconds remaining.

Perhaps they should take the “Winnersville” sign down in Valdosta after both Valdosta and Lowndes fell Friday in the first round of the GHSA Class AAAAAA playoffs. Valdosta was run out of Kennesaw by North Cobb as the Warriors intercepted Wildcats quarterback Shelby Wilkes five times in a 42-14 North Cobb victory. Tyler Queen threw for 154 yards and a pair of scores while also rushing for two scores and 157 yards. North Cobb suddenly looks like the scary team that won four games to start the season. Shane Queen’s team is averaging 40 points per game this year. Meanwhile, Lowndes was undone for just the second time at home in the postseason under Randy McPherson. Marietta’s Anthony Jennings finally played like the Elite 11 standout he proved to be over the summer with three scores and another on the ground. Jennings finished with 306 yards of total offense.

They could possibly move the sign to Gwinnett County, which went 9-2 in the first round of the playoffs.