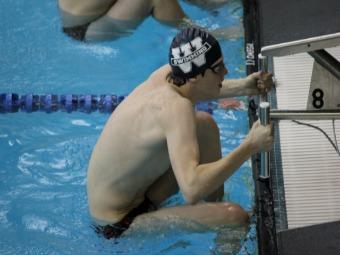 Class AA power Westminster hosted Mill Creek from the state’s largest classification Tuesday in one of the state’s first competitive swimming and diving meets with the visiting Hawks taking victories in both the boys and girls meets. The Mill Creek girls won 170-139 while boys edged Westminster 153.50 to 151.30.

However, the individual success of Westminster could not trump the depth and talent of Mill Creek. The Hawks won nine races in the meet between their boys and girls teams for an overall victory of 323.5 to 290.5. Westminster had 26 state qualifying times at the meet.

The Wildcats’ coach is beginning his 53rd year at the Westminster helm. Westminster has won 41 state championships between its boys and girls teams under Higgins’ guidance. Despite the loss, Higgins is proud of his team for competing against a much larger school and performing admirably.

“If you want to be the best, you’ve got the beat the best,” said the venerable coach about his scheduling strategy. “We don’t shy away from top competition.”

Meanwhile, at Marist, 72 divers from around the state competed in the Early Bird Diving Invitational Saturday. Marist senior diver Andrea Demick, a Georgia Tech commitment, won the overall girls competition and set a pool record in the 11-dive with a score of 534.80.

Another War Eagle senior, Taylor Gould, came in second with a dive of 487.25. In the Class AAAAAA competition, Centennial diver Kristen Drexinger won the 11-dive with a score of 359.75. Erin Hembree of Duluth was runner-up in Class AAAAAA with a tally of 344.7. St. Pius X sophomore Catherine Gross won the girls 6-dive after totaling 188.3 points. Julia Kee, a Marist sophomore, took second in the 6-dive with 186.55 points. Katie Stuart of Lambert took the Class AAAAAA 6-dive title after posting a 173.80.

In the boys meet, Centennial’s James Herch took the top prize in the 6-dive while teammate Chase Barron came in second in the 11-dive. Brendan Eckert of Duluth won the boys 11-dive with a score of 330.75, ahead of Barron’s 310.85. Riverwood’s Walker Wheeler won the Class A-AAAAA 11-dive event with a posted score of 466.75. Jonny Colley of Upson-Lee came in second with a 405.65.

Also in swimming, Centennial swept a meet with Roswell. The Knights won the boys meet 157-126 and the girls meet 195-88. Freshman boys swimmer Hunter Doster won the 200 IM and the 100 fly. Senior Sarah Sidelinger won the girls 100 backstroke and Allison Haynie came in second in the 50 freestyle.