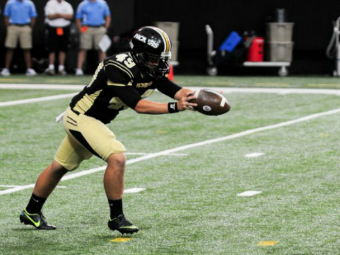 One four-seed vs one-seed game that really jumps off the page at you in Class AAAAAA is Colquitt County, owners of an upset win over Camden County Friday night, traveling to McEachern for a first-round game. If there is a program you don't want to play early in the playoffs, it is Rush Propst's Packers, who have a history of starting slow, then streaking into the playoffs and advancing deep into December.

Camden County gets a chance to bounce back off the ropes with its first-round game against Hillgrove, the team that ended the Wildcats' season in the 2010 playoffs. Camden County's 13-12 loss at Colquitt Friday had to sting, but there is much more on the line for Jeff Herron's Wildcats this Friday night against a Hawks squad that nearly upset No. 8 McEachern.

No. 1 Lassiter faces a tough and almost unfair test in the first round from No. 4 seed Brookwood, out of the always-tough Region 8. After a dream season that has the Trojans sporting a perfect 10-0 record, Lassiter's reward is tradition-rich Brookwood, the 2010 state champions.

Class AA No. 1 Calhoun faces a difficult game in the first round against Wesleyan, one of the few four seeds in the state that could give them a competitive game. The Wolves were perennial powers in Class A in recent seasons, and draw the defending state champs in their first year in Class AA since 2007.

Class AAAAA No. 4 Kell will host Southwest DeKalb Friday in another intriguing first-round playoff matchup. Venerable coach Buck Godfrey's squad will not be counted out of this one. It will be interesting to see if the Panthers can hang with the Region 7 champions.