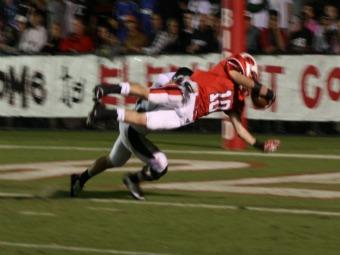 When the GHSA released the newly-reclassified regions this past winter, plenty of football fans in north Georgia circled Nov. 9 on their calendars, knowing that the Gainesville/Flowery Branch game could have huge Region 8-AAAAA title implications. Tonight's game is a de facto region championship game as the victor will receive the top seed for the upcoming playoffs with the loser settling for hosting a playoff game.

Flowery Branch has been red hot since dropping its first two games of the year. The Falcons have since reeled off seven straight victories behind sophomore running back Justin Curry and a stout offensive line. The emergence of Curry has really sparked Chris Griffin in his first year as Flowery Branch's head coach. In the Falcons' win over Clarke Central, Curry rushed for 141 yards on 23 carries with two scores. Jackson McDonald has really turned his season around after struggling against Northside-Warner Robins in the season opener. He has plenty of weapons to work with in Darius Curry, Cris Dilidili, Cameron Davis and Jamaad Stephens.

Defensively, Noel Padmore and Darius Curry form a lethal duo at cornerback while Jacob Allen is a stud at linebacker. Dexter Jackson eats up space up front.

On the other side, Gainesville will likely be hungry to wash away last week's upset loss to Loganville. The Red Elephants had been on a roll themselves, winning seven straight after falling to West Forsyth to open the year. Deshaun Watson has had some turnover problems this year, but he stands as the best player on the field anytime he steps onto the gridiron. In a game against Buford earlier this year, Watson overcame three interceptions to fire three touchdowns to lead the Red Elephants to a huge road victory. Three weeks ago, Watson rallied Gainesville from a 14-point hole with seven touchdowns to beat Clarke Central. He tallied 413 yards against the Gladiators.

The junior signal caller has plenty of firepower on offense, with Caleb Hayman, Tray Harrison, Jay Gaudlock and Rodney Lakey each stepping up to give opposing defensive coordinators headaches.

Defensively, Fred Payne and Quamon Peoples are both terrifying in the secondary and the front seven can get after the quarterback with its 3-4 base formation.

Watson will once again be the best player on the field, but Flowery Branch's defense has the players to take advantage of any mistakes Watson makes at The Branch.