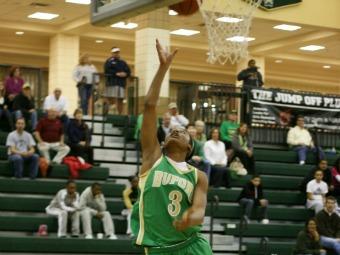 After initially pledging to attend Tennessee then backing off that commitment, Buford guard Kaela Davis announced over the weekend her intentions to attend Georgia Tech and play for coach Machelle Joseph. Davis is ranked as the top guard in the nation and No. 2 overall by ESPN and helped Norcross win a state title in 2009-10 before leading Buford to back-to-back finals appearances the last two years. Brother A.J. Davis, a small forward on Buford’s boys team, committed to Tennessee earlier this year.

Arabia Mountain senior Bakari Copeland announced recently that he has committed to USC-Upstate over offers from Southern and UT-Martin. Copeland told rantsports.com, “What I love about the program is that they are on the rise, their system fits my style of play, they immediately know how to use me when I get there and the players and coaches are really great people.” Copeland is listed a a combo guard/wing and received a two-star rating from 247sports.com.

Anyone expecting a decision soon from Peachtree Ridge small forward Jordan Capps may be waiting for a while. According to 247sports.com, Capps has decided to wait until spring to announce his decision. He currently holds offers from Appalachian State, Furman, Gardner Webb and Winthrop, but he is starting to receive looks from other programs such as Arkansas, Wake Forest, Minnesota and Illinois. If Capps can post a big season, look for the offers to come pouring in for the 6-foot-6, 195-pound Suwanee product.