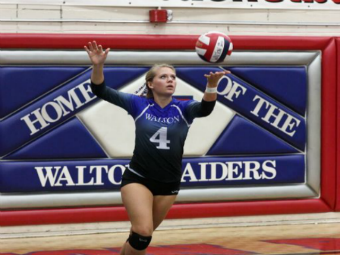 It was the fourth meeting of the season between Whitewater and Area 4 rival McIntosh, and the Wildcats prevailed yet again. Coach Valerie Jones’ squad beat its Fayette County neighbor all four times this season, and concludes the year 52-3. It is the second state championship ever for Whitewater with the other being in 2009.

“We executed well at crucial times,” said Whitewater coach Valerie Jones. “We were down 7-1 in the second set, and battled back. We lost the set, but it showed we were not going down easily.”

McIntosh was led by Breana Jones, an Arkansas commit who had nine kills and 6.5 blocks, and Rhana Mitchell, who made 19 digs. Senior Ashley Young had 11 kills and two blocks for the Chiefs while junior setter Rhegan Mitchell had nine digs and 20 assists.

The championship is Walton’s third in a row and eighth overall since the GHSA began handing out state championships for indoor volleyball in 1993. The Raiders defeated Harrison last year in the final as well, and it was Walton’s second victory this season over the Hoyas. The Raiders end the season at 34-7 while Harrison fell to 49-7.