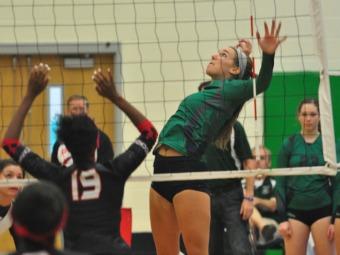 Championship matches in the Class A-AAAA volleyball tournaments will take place today at Marietta High School, while the Class AAAAA-AAAAAA finals will be played Monday at McEachern.

The top two seeds in Class AAAA, Columbus and Sandy Creek, will meet in today’s final. Coach Paul Collins’ Patriots are looking for back-to-back state titles, while the Blue Devils are hunting their second in program history. Sandy Creek is led by freshman setter Alexis Broadwater, who was among the state leaders in assists with 1,049 during the regular season. Senior outside hitter Allie Davenport, a UT-Chattanooga commit, set school records this year for Sandy Creek in kills and career aces.

St. Pius X is a bit of a surprise in the Class AAA final after upsetting perennial-power Woodward Academy 3-0 in Wednesday’s semifinal. Coach John Frederick’s squad faces top-seeded Blessed Trinity in the final, which won state titles in 2006 and 2010. The two teams faced each other twice this season with the Titans winning both times.

Buckhead rivals Lovett and Westminster will square off in the Class AA championship match after the No. 4 seed Lions upset five-time state champ Wesleyan in five sets Wednesday. Jona Braden’s Wildcats beat Lovett in two meetings this season. Westminster is looking to win its eighth state title while Lovett is seeking its first.

In Class A, top-seeded Walker will play Landmark Christian. The Wolverines, from Marietta, have not lost to a Class A team all season but have never won a state championship. The War Eagles won state titles in 2001 and 2003.

All matches at Marietta High School