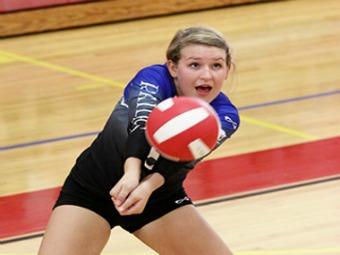 This year when all is said and done at Marietta High School and McEachern High School, six volleyball champions will be crowned, two more than in every year since 1998. While many people figured the GHSA’s reclassification would really just affect football and perhaps softball and basketball, volleyball has certainly been changed with Class AA and A each getting its own champion and the creation of Class AAAAAA. Reclassification also shifted old rivalries, created new rivalries and moved several past champions into new classes. Defending Class AAA champ Sandy Creek moved up to Class AAAA while Pope jumped to Class AAAAA and Walton moved up to Class AAAAAA. Reclassification aside, though, great volleyball once again has been found throughout the state of Georgia with schools such as Harrison, Savannah Christian, Sonoraville, Westside-Augusta and Northside-Columbus all competing for a GHSA state title.

Blessed Trinity and Sonoraville have found tremendous success within the borders of the Peach State. Blessed Trinity rattled off 30 straight wins over in-state foes before McIntosh finally knocked off the Titans, giving Blessed Trinity its only loss to a Georgia opponent entering the postseason. Sonoraville had defeated 33 straight opponents from Georgia after knocking off Beach in the Class AAA second round before losing to St. Pius X in the quarterfinals.

Blessed Trinity head coach Paul Stevens didn’t necessarily set a goal to go undefeated against Georgia foes, but the Titans coach did put several challenges out to his team.

“We set lofty goals for ourselves at the beginning of the year and now in the home stretch, it’s really just a matter of keeping those same goals in the forefront of their minds,” said Stevens. “The captains have done a great job setting that tone for the team.”

Sandy Creek also set goals for this year, with the team’s five seniors leading the charge. Paul Collins noted that his two outside hitters, Allie Davenport and Tori Sellers, have really stepped up as Sandy Creek tries to win another title.

“They are the first on the court to get the nets set up for practice and usually are at the front and leading the conditioning,” said Collins.

Collins noted that his five seniors are just the latest in the line of “exceptionally talented and hard-working student-athletes that have been crucial” to Sandy Creek’s success.

“Each year we have to call on new players to step up and be willing to work hard so we can continue to be successful.”

The strategy has seemed to work as Sandy Creek has won two titles in the last four years.

Woodward Academy, winners of 10 GHSA state volleyball titles since 1993, could eventually meet up against either Blessed Trinity or Sonoraville in the finals, but Tad Sahara, the War Eagles head coach, said that Woodward Academy’s history of success is just that.

“We certainly try to turn a fresh page each season, creating a new team identity with each season,” said Sahara. “At the same time, we definitely embrace our traditions and past successes.”

Woodward Academy has faced some of the best teams not just in Georgia, but across the southeast to prepare for the playoffs and a run at another title.

“It is a balancing act (trying to live up to past successes), and I think each team needs different buttons pushed to be the best they can possibly be,” continued Sahara.

The postseason is a different animal admitted Sahara, and while the team still practices with a high level of intensity, the focus can be shifted directly onto one foe.

“In the postseason we do spend more time preparing or game planning for certain teams,” revealed Sahara. “In the regular season, we do not really get a chance to do an in-depth game plan of other teams, and it certainly may intensify our level of focus.”

Cobb County sent three teams to the Class AAAAAA Elite Eight withWalton, Harrison andNorth Cobb all reaching the third round. The Raiders have claimed the last two Class AAAAA titles and five since 2000, something that head coach Suzanne Fitzgerald believes has cemented the program’s reputation as a power.

“At Walton, we embrace the tradition of hard work and commitment, not exclusively the title of state champion,” said Fitzgerald. “It’s imperative that the athletes, and to some degree, the parents and fans, embrace the intensity at which the program trains more than the wins and losses. We do embrace the past, but every team, every season is truly a new group and has to be honored and appreciated in their own right as well.”

The Raiders have won at least 28 games each year since 2007, and Fitzgerald believes that Walton’s attitude of putting the team before the individual this year more so than in years past has helped the Raiders stay near the top of the rankings all season long after facing some of the area’s top competition.

“Our entire senior class - Morgan Patterson, Bella Haswell, Tori Ferguson, Olivia Pierce and Anouska Best - have been an outstanding group of leaders for us,” said Fitzgerald. “They all put team before self. We have been very fortunate.”

The team Walton defeated last year for the title, Harrison, is back and looking to win the program’s first crown since 2006. Harrison head coachClay Taylor, who roamed the sidelines when Harrison claimed the AAAAA title back in 2006, has been a bit more relaxed with how he runs his team this season after coming up just short one year ago, as the players themselves realized they have “unfinished business” from last season.

“Practices are productive, but light-hearted and fun,” said Taylor.

The team itself, though, is very focused and business-like on the court. Taylor said his players are always trying to better themselves in the quest for a title.

“The team is working on being more aggressive in every phase of the game,” revealed Taylor. “Passing and controlling the pace of the game, as well as finishing plays and minimizing unforced errors is the focus in our workouts.”

When March Madness rolls around, people love printing out brackets and filling them out all the way to the finals, something that cannot be done with the GHSA volleyball championships. After the first two rounds of the playoffs, the GHSA reseeds the remaining teams for the quarterfinals, then regular bracket play continues for the semifinals and finals. While this prevents some major matchups from occurring in the quarterfinals instead of the finals, sometimes it makes it difficult to predict who you will play down the line.

“We do not look past our current opponent and the brackets make it difficult to do so anyway since you don’t really know how teams will perform and who will advance,” said Taylor.

“We don’t know who we’re going to see,” said Stevens on how the brackets shift. “We’ve gotta take it one match at a time. We just try to prepare for that opponent as best as we can and go forward from there.”