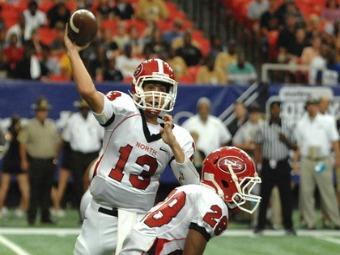 Chaz Thornton was featured on the Score 44 earlier this year based on the 5-foot-8, 185-pound running back's incredible vision, power and speed. He proved his worth early on with three touchdowns and 195 in a game against Habersham-Central, a Class AAAAAA team. Thornton followed that performance up by rushing for 241 yards on 40 carries against Hart County. The offers started coming in then as South Alabama, Chattanooga and Georgia State all offered. Thornton would later receive a scholarship offer from Bowling Green, and last week, Thornton visited Georgia State. It will be interesting to follow Thornton's recruiting process after his most recent outing, a 217-yard, three touchdown game where he toted the rock 37 times. He has proven that, despite his size, he can be a 30-plus carry back in the right system.

Emanuel Byrd passed for 246 yards and three touchdowns and rushed for an another 92 yards and a touchdown but Albany fell 35-27 to Worth County. Byrd has received offers from South Alabama and Savannah State, but he told TurtleSportsReport.com that he is interested in Maryland above all others. Byrd has attended several camps across the country including Georgia, Florida and Auburn, but Byrd would likely pull the trigger on a pledge to Maryland if the Terps offer. Look out for Byrd if he stays healthy and his receivers start holding on to his passes. Albany receivers dropped 17 passes in the first two games of the year.

North Gwinnett has boasted a serious run of successful quarterback that have gone on to sign with an impressive list of schools over the past few February's. Michael Tamburo signed with Boise State, followed by C.J. Uzomah to Auburn and Scotty Hosch to Harvard. The next great Bob Sphire project is senior quarterback Michael Haynes. The 6-foot-1 185-pound dual-threat standout has passed for nearly 1,600 yards with 17 touchdowns and rushed for another 600 yards and three scores. He has earned Player of the Month from the Gwinnett Touchdown Club and was MVP of the National High School Gridiron Challenge as North Gwinnett took down A.C. Flora. Now Haynes, whose father played quarterback at Brookwood before heading to Air Force and UGA, is starting to receive offers. Mercer has extended an offer and Haynes has been receiving heavy interest of late from Wofford, Yale, Princeton, Georgia Southern and Furman. He is also receiving interest from several FBS schools as a walk on. It appears that North Gwinnett will have another quarterback go on to the next level and continue what has quickly become a tradition at North Gwinnett of sending quarterbacks on to the next level.