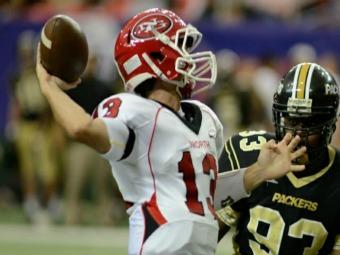 Two Region 7-AAAAAA teams met Friday night at the Hill with a chance to solidify a home playoff game as North Gwinnett headed to the eastern part of Suwanee to face a dangerous Collins Hill squad. Despite a spirited first half full of scoring, the North Gwinnett defense made enough plays to escape with a 38-24 decision.

The Eagles were led by quarterback Brett Sheehan, who looked ready to lead Collins Hill past the Bulldogs for the first time since 2005. The Eagles and Bulldogs went back and forth in the first half, combining for 45 points as Sheehan passed for a score and ran for another to go with Tyler Henderson’s 42-yard touchdown run. North Gwinnett quarterback Michael Haynes connected with Caleb Scott for a 24-yard touchdown and Cam Lewis and Nick Andryusky each tallied a rushing score. Mitchell Blanchard’s 35-yard field goal with less than one minute to go before halftime gave the Eagles a 24-21 lead at intermission.

While the offenses could not be stopped in the first half, the defenses could not be contained early in the third quarter. Each team forced a pair of stalled drives before Dante Sawyer took over a stretch for the North Gwinnett defense that changed the game. Sawyer sacked Sheehan and then forced him into the arms of Preston Green, who managed to strip the ball back to the one-yard line.

North Gwinnett took advantage of incredible field position to bust out a double-reverse flea flicker for an easy 38-yard touchdown connection between Haynes and Scott to give the Bulldogs the lead once again. North Gwinnett’s defense and Collins Hill penalties would once again push the Eagles back with just seconds to go when the play of the game took place, a play that possibly should not have counted.

After a penalty pushed Collins Hill back following a completed pass to inside its own five with 2.8 seconds left, the official dropped his arm for the clock to resume, which it did and the horn sounded, seemingly ending the third quarter. However, Sheehan snapped the ball two counts after the clock read 0.00 before throwing a pass to North Gwinnett’s Ben Carswell, who returned it for a score. On the play, Sheehan was leveled and had to hobble back to the bench. Multiple players appeared to be walking towards the sidelines after the initial horn sounded, but the play was allowed to stand and neither coach asked for an explanation as to why the play was allowed.

Sheehan lasted only four more plays before he was lifted for the remainder of the fourth quarter. He was seen on the trainer’s table with a huge ice bag over his right ankle throughout the fourth quarter. North Gwinnett added a short field goal for the final 38-24 margin.

North Gwinnett has all but locked up a home playoff game, likely the No. 2 seed while Collins Hill will need to win out to ensure the No. 3 seed. After facing Duluth on the road next week, the Eagles return home to face Mill Creek, a team eager to sneak into the No. 3 spot in Region 7-AAAAAA. If Sheehan is out, Collins Hill could be in danger of dropping to the No. 4 seed.