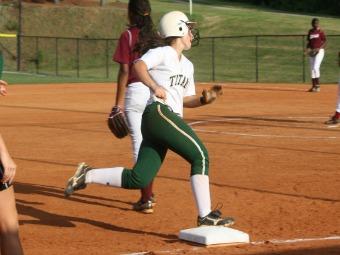 At the state softball tournament from Columbus, No. 1 Kennesaw Mountain fell to Mill Creek 6-3 in the quarterfinals and will play Region 4-rival Harrison today in an elimination game. Also in AAAAAA, No. 5 Lassiter defeated No. 2 East Coweta and will face No. 6 Archer today in the winner's bracket. No. 8 Collins Hill beat Harrison 3-2 and will play Mill Creek today also in the winner's bracket. Archer defeated Hillgrove in the fourth and final game in the state's largest classification. The Hawks will face elimination against East Coweta today.

Class AAA Buford rolled past Jackson 7-1 after scoring four runs in the first inning. Pitcher Bria Bush got the win in five innings of work while Tessa Daniels homered and drove in three. No. 4 Blessed Trinity fell to Central-Carroll 2-1 and will meet Ringgold today.

Wesleyan, ranked second in Class AA, advanced with an 8-3 win over Vidalia.

Despite two RBIs by Nora Harlin, Pace Academy, in its first-ever trip to Columbus, fell to Darlington 7-4 and will face George Walton today in an elimination game. No. 6 Mt. Pisgah defeated Eagle's Landing Christian 10-3 then Savannah Christian 8-1 to advance to the semifinals where the Patriots will face Prince Avenue Christian today.