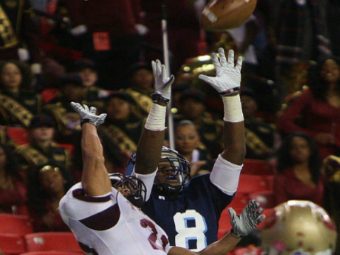 Brett Sheehan of Collins Hill and Arshad “A.J.” Jackson of Lovejoy are the two additions to this week’s Score 44 list. Sheehan, who has the Eagles in a position to host a playoff game with a victory this Friday over North Gwinnett, tossed five touchdowns in the first half of a win over Meadowcreek. He was 17-of-19 against the Mustangs. Sheehan, 6-foot-2, can also pose a threat as a runner as he scored a touchdown on the ground against Mountain View on GPB.org several weeks ago. Jackson has five touchdowns on the year for Lovejoy in an offense loaded with talent. While his numbers are not exactly eye-popping, the Lovejoy coaches call Jackson a complete player who has really worked on his blocking skills to help give time for fellow Score 44 standout Alejandro Bennifield and open holes for another Score 44 member, Travis Custis.