Bruce Cobleigh Back On Harrison Sidelines 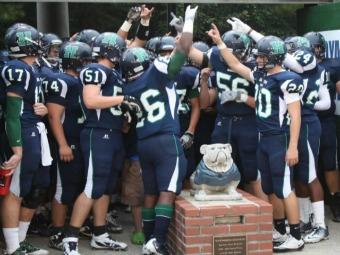 Harrison fans will see a familiar face running the football program on an interim basis after Marty Galbraith left the Harrison program Thursday morning. Cobb County School District Communications Specialist Doug Goodwin confirmed this morning that Galbraith is no longer with the program, citing an personal matter and would not comment further. Goodwin also confirmed that Bruce Cobleigh will take over as interim head coach until a new permanent coaching hire can be made. He did not have a timeline for that, saying it was a decision that would be made by Harrison High School. The high school had no comment this morning on the situation.

Galbraith was hired before the year, taking over for David Hines. He led Harrison to a 4-3 mark including wins over Woodstock, Campbell, Pebblebrook and Kennesaw Mountain. He was 3-2 in region play but fell last week at home to South Cobb. Galbraith was returning to Georgia high school football after spending time at the college and pro level. He was formerly a coach at Lassiter.

Meanwhile, Cobleigh will resume head coaching duties after roaming the Harrison sidelines for 16 seasons, racking up a 125-58 record. Cobleigh led the Hoyas to the playoffs 12 times with a winning record 13 out of 16 seasons. The 2000 team reached the state finals before losing to Parkview. The school named the stadium after him following his initial retirement from coaching in 2007. He returned to the sidelines this season to serve as offensive coordinator for Galbraith.