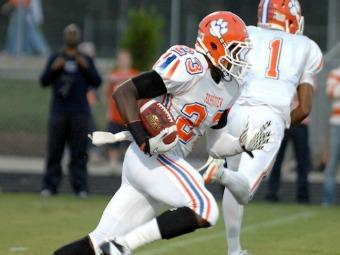 Once again the new Score 44 list finds two new faces as Parkview’s Chris Carson and Chamblee’s Davin Bellamy make their first trip onto the list. Carson has been a force for the Panthers, racking up 894 yards on 134 carries with 10 scores. Carson carried the ball 28 times in Parkview’s victory over Dacula, totaling 169 yards with four scores. He seems to rise to the occasion in Parkview’s biggest games, rushing for 258 yards with two scores against Brookwood and finding the end zone twice in the upset of Grayson. Meanwhile, Bellamy has helped Chamblee to a 6-0 start including a big win over GAC earlier this year. Before Friday’s shutout win over Columbia, Bellamy had helped the Bulldogs force 16 turnovers by forcing two fumbles. He had also recorded seven of the team’s 21 tackles for a loss.