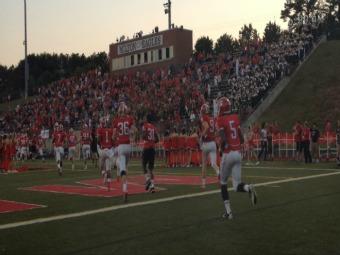 The Lassiter Trojans feature an explosive offense that has produced plenty of firepower all year; however the Milton defense boasts one of the nation’s best defensive ends. Milton’s Carl Lawson will line up against Lassiter’s offensive line boasting 13.5 sacks through the team’s first five games. Lawson is listed No. 5 in the ESPN 150, and the future Auburn Tiger isn’t the only weapon Milton trots out each week. Jerrell Knight and Marshall McConnell each add plenty of support on the defensive side of the ball.

Offensively, Milton boasts one of the state’s best rushing attacks and it starts with the offensive line. Josh Harris and Cory Helms are both headed to Wake Forest next year and Eason Fromayan has pledged to TCU, but sophomore Nick Wilson may be the best talent on the line despite his age. Peyton Barber and Trayvon Paulk have been able to find plenty of holes, and when those two aren’t carrying the load, look for quarterback A.J. Bush to look up top for Malik Mitchell.

Lassiter head coach Jep Irwin is also pleased with his offensive line, telling Score recently that he’s been pleased with the line play thus far this year. The line has been able to keep quarterback Eddie Printz relatively clean throughout the early part of the season. Printz has plenty of weapons in Juwan Dickey, Ryan Jenkins, Blake Wilson, Hakim Shahid and Willie Police. Entering the Walton game, Police was the team’s leading receiver as he plays mostly in the slot but sometimes comes out of the backfield.

“(Police) is one of the most valuable players on our offense even though he doesn’t have a lot of accolades,” said Irwin. “Obviously, you need your quarterback to play pretty well in the offense we run and not that any of our guys are not important, but we’ve gone back and analyzed it: when Willie is really effective, we’re much more explosive on offense.”

Lassiter’s defense doesn’t have many five-star guys, but Patrick Levandoski made several crucial plays in a win over Walton on Oct. 5 and Trent Gantt is an important piece up front in the Trojans’ 3-3-5 attack. For the second straight season, Lassiter’s defensive secondary is perhaps the team’s biggest strength with Robert Dowling, Chris Murphy, Clay Roelle and Zach Spies joining Levandoski.