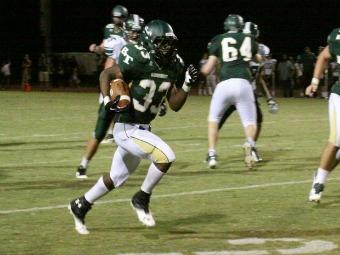 Blessed Trinity sent home its homecoming crowd with fond memories from a 28-14 victory over Decatur as the Titans inched closer to a playoff berth in Region 6-AAA. No. 9 Blessed Trinity took the opening possesion and drove down a short field before Spencer McManes plowed into the end zone for the first of two rushing scores on the night. The Titans would put two more rushing scores on the board in the second quarter as Tim Mertz scored from eight yards out and freshman back Milton Shelton ran for a 40-yard score to atone for an earlier fumble.

Decatur would have opportunities in the first half, but two Vito Antinozzi interceptions and two turnovers-on-down before the half would leave Blessed Trinity holding a 21-0 lead at intermission. Decatur would once again turn over the ball on downs to open the third quarter before eventually getting the ball back and start driving on the Titans. Antinozzi would pick up a crucial first down with his legs, but the junior appeared to aggrivate the shoulder injury that kept him out all of last season and would leave the game.

Backup quarterback Joe Comer and running back Andrew Brown finished off the drive on the ground with Brown taking it in from 29 yards out for a touchdown. Blessed Trinity would go to work and burn nine minutes off the clock before McManes plunged in from one yard out for his second score. Comer would tack on a late score, but Blessed Trinity was able to kill the clock for the win.