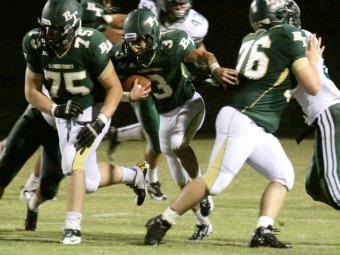 Playoff positioning will be at stake when Blessed Trinity hosts Decatur in a crucial Region 6-AAA matchup tonight.

The Titans and Bulldogs are part of a loaded region that also includes St. Pius X, Cedar Grove and Woodward Academy, so every game matters as the battle for four postseason spots heats up.

Blessed Trinity (4-1, 1-0) kicked off the season with a 25-20 victory over Westminster and the Titans have bounced back impressively from a 24-7 loss to Lovett in their second game. The Titans took care of Hart County and White County, then opened region play by defeating Woodward 21-14 on Sept. 28. Coming off of a bye week, they will be well-rested and energized for Decatur.

The Titans are led by senior quarterback Spencer McManes, who struggled against Lovett, but has otherwise been stellar. McManes has com- pleted 37 of 82 passes for 509 yards, six touchdowns and six interceptions. In four wins, he has completed almost half of his attempts while throwing for six scores compared to just two picks. Mc- Manes spreads the wealth around, having tossed all six touchdowns to six different receivers. But his favorite target is senior Sam Roberts, who has 14 receptions for 264 yards and a score. On the ground, freshman running back Milton Shelton has torched opposing defenses for 431 yards and three touchdowns on 80 carries.

Decatur (3-3, 0-2) lost its opener to Grady and fell to Cedar Grove on Sept. 29, but in between those setbacks the team reeled off three straight wins-at the expense of Therrell, Greenville and Clarkston. The Bulldogs lost last week against Woodward Academy.

An effort to stop Blessed Trinity's attack will be spearheaded by junior cornerback Terryon Robinson, who suffered a high-ankle sprain in early September, but looked close to 100 percent when he picked off two passes against Cedar Grove. Robinson also returned an interception 101 yards for a touchdown in a 46-7 blowout of Therrell.

Robinson stars on offense as well, along with fellow receivers Perez and Terez Cowan, who are identical twins. Highly-touted sophomore quarterback Devontae Carter is dangerous by himself, but with those weapons at his disposal he is an even bigger threat on every play. Additionally, Blessed Trinity will have to watch out for halfback Elijah Rachel and fullback Nic Bentley, who also roams the middle of Decatur's defense at linebacker.