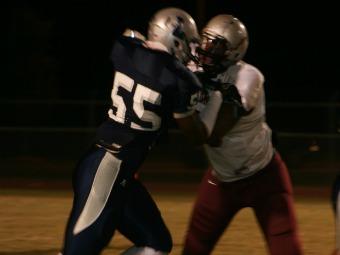 Luella Lions defensive end Tevin Jones celebrated his commitment to Georgia State with a huge effort against Druid Hills. The 6-foot-4, 250-pound Jones recorded seven tackles, including two for a loss, half a sack, three pass breakups and recovered a blocked punt for a touchdown. According to Georgia State's Panthertalk recruiting site, Jones held offers from UConn and Florida International.

Collins Hill wide receiver/linebacker Justin Wyatt committed last night to Ohio per the AJC's Michael Carvell. Before the year, Eagles' head coach Kevin Reach noted that the 6-foot-1, 195-pound athlete was going to be huge for the Collins Hill program.

"Linebacker Justin Wyatt has been a great addition for us," said Reach. "He has had several offers. We expect great things from him."

Wyatt and Daniel Fish have led a very talented Collins Hill defense. Wyatt will be counted upon to try and shut down Norcross' Alvin Kamara this Friday.

Ridgeland senior Vonn Bell will play in the secondary at the next level, but last week, Bell scored four touchdowns on five touches, racking up 271 yards in Ridgeland's win. Bell hauled in touchdown receptions of 32, 63 and 88 yards while posting a 79-yard run for a score. Bell managed to stand out with Alabama coaches watching from the sidelines as the Crimson Tide team was on a bye. Bell's other finalists include Tennessee and Ohio State, though he said he will also visit Auburn.