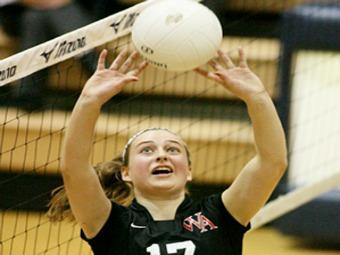 Class AAA No. 2 Woodward Academy bounced back nicely after taking a loss in the Tournament of Champions Finals in South Carolina. Coach Tad Sahara's squad won five matches between Thursday and Saturday without dropping a set. The War Eagles beat Class AAAAAA No. 2 Harrison, Class AAAA No 4 Southeast Whitfield, Class AA No. 10 Lovett, Central-Carroll and Haralson County during the impressive three-day stretch. The hitting duo of seniors Sydney Cooper and Lexie Norfleet continues to impress. Cooper leads the state in hitting percentage at .465 with 158 kills while Norfleet is third in hitting with a .414 percentage and 142 kills.

Senior outside hitter Amanda Dachs has led Northview this season to a 30-9 record and a No. 4 ranking in the Class AAAAA Score Atlanta volleyball poll. Dachs leads the state with 462 kills.

Class A No. 4 Landmark Christian has benefited from exceptional serving this season. The War Eagles, who are 28-14 and in first place in Region 3-A, feature possibly the state's top server in senior Tiffany Creamer, who has a state-best 115 service aces this season. When Creamer isn't acing opponents, junior Lilly Kessler is. Kessler has 59 aces in 86 games this year.

Finally, Class AAAAAA No. 1 Walton took care of business Tuesday on Senior Night by defeating region rivals Roswell and Etowah 2-0 in each match.