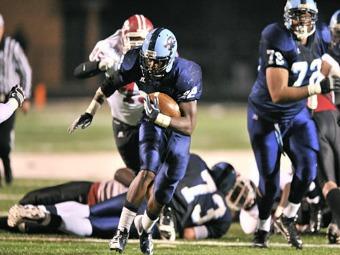 Tiquan Lang made the Score 24 2Look4 last year and now debuts on the Score 44 after returning a punt for a score in addition to a rushing score in No. 4 Lowndes' 17-14 victory over Colquitt County. Lang is a standout cornerback that has committed to South Alabama, though, reportedly Middle Tennessee State has since offered Lang, the latest in a long line of successful Lowndes defensive backs. Lovejoy's Alejandro Bennifield has been on fire this year, passing for 13 touchdowns with just three interceptions. The UTC commit threw four touchdowns in Lovejoy's win over Druid Hills last Friday. Meanwhile, injuries have led to Parker McLeod falling from the rankings. McLeod missed the Raiders' game two weeks ago with an injury and will likely miss at least the next three games with an ankle injury.