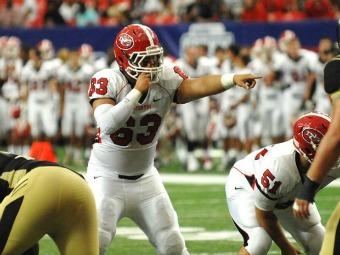 Josh Mercer rushed for 1,354 yards and 16 touchdowns last year, catching the eye of plenty of programs across the country. Thus far this season, the South Effingham running back has tallied 513 rushing yards and 10 touchdowns through four games. Mercer celebrated his commitment to N.C. State last week by rushing for 180 yards and two scores and also taking a kickoff to the house for another score. The senior can also burn it up on the track as he finished third in the Class AAAA 100-meter dash last year and fifth in the 200 meters. He selected N.C. State over Wake Forest, Tennessee and Georgia Tech.

North Gwinnett's Andy Kwon announced his decision to commit to Georgia Southern. The Bulldogs' starting center is projected as either a center or a guard at the next level. He is the third North Gwinnett player to announce a commitment after Donnie Miles pledged to UNC and Jalen Brooks to Maryland.

With the first Score 24 2Look4 list set to debut later this week, Richmond Hill quarterback Nick Fitzgerald is proving that the Georgia quarterback Class of 2013 won't spell the end of great Peach State signal-callers. Fitzgerald, a junior, has already been receiving interest from Kentucky, N.C. State and Oregon according to various recruiting sites. Fitzgerald measures out at 6-foot-5, 205-pounds, and while he is listed as the reserve quarterback playing behind Dominique Allen (committed to the Air Force Academy), Fitzgerald still sees the field plenty, racking up 104 rushing yards while delivering a 26-yard strike for a score against Savannah. He is playing some wide receiver this season behind Allen and caught two scores in the win against Glynn Academy including the game-winning score.