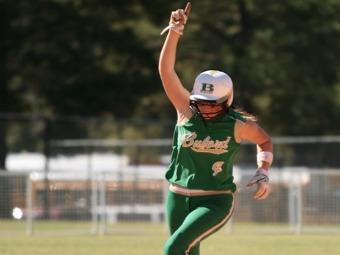 Class AAA No. 1 Buford clinched a berth in the state playoffs with wins over East Hall and Fannin County in the Region 7-AAA tournament Saturday. Monday's Region 7-AAA softball tournament action was postponed due to poor weather. Buford was scheduled to face Dawson County. Emily Crocker earned the win against East Hall while Brian Bush got her 13th win against Fannin County. Jordan Deep was 6-for-8 with five RBIs in the two games. The win over Fannin County gave Buford its 300th all-time win in fastpitch softball. The program's all-time record is 300-89-2. The Wolves are hitting .357 as a team and are holding opponents to a .201 average.

Creekview shutout Northview 12-0 Friday to clinch a berth in the Region 7-AAAAA region finals at Pope. The Grizzlies will take on the Greyhounds on Wednesday in a three-game series.

Class AAAAAA No. 1 Lassiter finished the regular season 25-2-1 and won its first game in the Region 5-AAAAAA tournament over Roswell 7-0. The Trojans have won 10 straight games.

Walker struggled to a 10-13 regular season record, but improved greatly on its 3-22 finish in 2011. Sophomore Katlin Seger helped the Wolverines by hitting .594 with 15 doubles and a home run.

Fellowship Christian's Dariean Ward, a junior, and Olivia Karam, a freshman, are among the state leaders in batting average. In 11 games, Ward is hitting .784 and Karam is batting .771. Ward has also homered 10 times.

South Paulding sophomore pitcher Madason Messer has 15 of her team's 19 wins this season. Messer carries a 15-4 record with 16 complete games and seven shutouts.