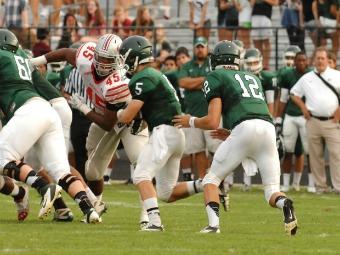 Mountain View is a team trying to build its program one game at a time. In just its third full varsity season, the Bears entered Friday’s game at Collins Hill winners of two of their last three games, but the Eagles would prove to be a step up in competition. Using a strong running game, the Collins Hill Eagles skated to an easy 40-7 victory that required a running clock in the fourth quarter.

Quarterback Brett Sheehan entered the game with more than 700 yards passing through his first three games, but the future FIU signal-caller would do most of his damage with his legs. Sheehan had a 58-yard score on the first play from scrimmage wiped away due to a holding call but would later scamper in from 25 yards out for his only score of the night. The Eagles’ running game saw Tyler Henderson score twice, Thomas Harris notch a 68-yard rushing score and Daniel Fish take one in from three yards out in the first quarter.

Mountain View would add on a touchdown late in the game when Marvin Elam pounded into the end zone from one yard out, but this game belonged to the Eagles. Kevin Reach’s squad may be more rounded than his 2010 team that reached the Class AAAAA semifinals. Sheehan connected with eight different receivers Friday, and Reach can rely on a host of weapons in both the running and passing game. Henderson may just stand 5-foot-9, 175-pounds, but the small package offers a big pop each time he carries the ball. On his second touchdown of the evening, Henderson broke three tackles and drove four would-be tacklers into the end zone.

The defense, meanwhile, also looked strong, shutting down Mountain View’s Wing-T and spread looks. The defense put the first points on the board, sacking Chris Bartlett for a safety and later held on a goal line stand in the third quarter. The Eagles’ seven-quarter shutout streak ended when Elam scored late in the fourth.

The next two weeks will be telling to see if Reach’s team will make a serious run at the Region 7-AAAAAA title. The team travels to Peachtree Ridge this Thursday before returning to The Hill to host Norcross. North Gwinnett visits east Suwanee Oct. 26. Collins Hill will likely punch its playoff ticket over the next few weeks with games against Meadowcreek, Duluth and Mill Creek, but if the Eagles want to host a game or two in the playoffs, the offense and defense will need to step up against major region foes.